MILWAUKEE, Wis. – Like so many great scientific discoveries, Tom Brock started the research that would go on to revolutionize the field of biology — and pave the road to the development of the gold-standard COVID-19 tests used to fight a pandemic — with a question.

In 1964, the microbiologist was driving out West when he stopped to visit Yellowstone National Park. It was the first time he saw the park’s picturesque hot springs.

“I got to the thermal area and I saw all these colors of what were obviously microbes,” said Brock, then a professor at Indiana University. “No one seemed to know much about them.”

As the water in the hot springs flowed out from the pools, it was cooling, creating a range of temperatures and environments for bacteria to grow. But in the hottest parts of the springs, where temperatures ranged from 70 degrees Celsius to above 100 degrees Celsius — the boiling point of water — the springs were clear, thought to be uninhabitable.

Brock wanted to know more about the bacteria and to see if any were living in the hottest waters.

The next summer, he returned to Yellowstone with a student research team and a grant from the National Science Foundation to research life at high temperatures. It was the start of what would become a decade of work studying the park’s microscopic creatures.

Brock was performing what’s called basic research. He did not know for sure where the work would lead him or how his findings might be used in the future. The goal was as vague as it was grand: to advance scientific understanding about the organisms living in one of Earth’s most extreme environments.

In doing so, he changed the world.

Coronavirus Watch newsletter: Sign up for daily updates right in your inbox

In 1966, Brock and an undergraduate student, Hudson Freeze, discovered a new bacteria that thrived in waters above 70 degrees Celsius. Brock named it Thermus aquaticus.

The discovery of this hardy bacteria revolutionized the fields of biology and medicine.

“A lot of people thought (the research) was kind of a specialized sort of thing,” said Brock, now an emeritus professor at the University of Wisconsin-Madison. “Working on organisms in Yellowstone in the summer sounded kind of like a ‘vacation study.'”

What no one could have known then was that inside that bacteria was the key ingredient for the gold-standard diagnostic tests that would be deployed nationwide by the tens of millions nearly 50 year later, on the front lines in the fight against COVID-19.

‘This is our generation’s D-Day’: As US nears 500,000 COVID-19 deaths, weary health care workers fight on amid the heartbreak

The key to the polymerase chain reaction, or PCR

As the news of the discovery spread, biochemists across the country started to research Thermus aquaticus‘ inner workings, Brock wrote in a 1997 article for the Genetics Society of America.

Brock and Freeze soon realized that the bacteria’s enzymes — proteins that carry out chemical reactions inside of a cell — kept working in temperatures that were even higher than the boiling point of water. Enzymes from other organisms can’t tolerate such heat; they lose their structure and stop working, like an egg that changes its form when placed in a hot frying pan.

One of Thermus aquaticus’ enzymes is today the key ingredient in the polymerase chain reaction — PCR — which laboratories around the world are using to detect the virus that causes COVID-19.

PCR, a technique developed by biochemist Kary Mullis in the 1980s, is a staple procedure used to diagnose diseases. PCR also plays a role in helping scientists detect DNA left at crime scenes, sequence genomes and track mutations like those in SARS-CoV-2, and determine a person’s ancestry or a dog’s breed.

PCR can make millions and billions of copies of segments of DNA, amplifying even the smallest traces of genetic material from any germ, animal or person scientists might be searching for. The process requires heating up a sample to very high temperatures and then cooling it back down, multiple times.

The enzyme from Thermus aquaticus, called Taq polymerase, copies the DNA to make more of it. Because it can withstand the heating process, labs are able to run the tests much more quickly than they would without it, because other enzymes would be destroyed every time the sample was heated up.

While there are other diagnostic tests available for COVID-19, scientists call PCR tests the gold standard because they are very accurate, sensitive and relatively fast. Even if there is only a small amount of the virus in a patient’s sample, PCR will probably find it.

Before PCR became widely used in the ’90s, scientists would have to try to grow viruses in the lab in order to diagnose diseases, a dangerous process that takes days to weeks, said Al Bateman, director of the Wisconsin State Lab of Hygiene’s communicable disease division.

So fundamental is Taq polymerase that one of the COVID-19 tests used by the state lab is named after it: TaqPath.

“All of the gold-standard diagnostic PCR tests: for COVID-19, for flu, for (tuberculosis) — we run a lot of PCRs here,” Bateman said. “None of that would exist.”

The power of basic research

Brock was 10 years old when he got his first chemistry set. His dad set up a little lab for him in the basement of their Cleveland home. He was interested in nature early, exploring the old abandoned farm near their home as a child.

When he was 15, his father died, leaving Brock to pick up odd jobs for 25 cents an hour to help support his family. He graduated from high school in the midst of World War II, and immediately enlisted in the U.S. Navy.

After the war, he enrolled at Ohio State University in 1946, where he studied as a beneficiary of the GI Bill. He ultimately earned his masters and doctorate at Ohio State, and made his way to Indiana University as a professor in 1960. He moved to UW-Madison in 1971 and became chairman of the department of bacteriology in 1979.

The discovery of Thermus aquaticus is far from where Brock’s research ended.

During a decade of research on hot springs and geysers at Yellowstone, Brock authored some 100 papers based on his work.

Over his career, he’s written some 250 papers and 20 books, and accumulated multiple awards.

Now 94, Brock is retired from UW-Madison but still lives about a mile from the university. He has shifted his focus to conservation, managing Pleasant Valley Conservancy in Wisconsin with his wife, Kathie.

Brock himself has held up his career, and particularly the discovery of Thermus aquaticus, as a testament to the power of basic research.

“You know, you never know what’s going to happen,” Brock said of such scientific inquiries.

He remembers there was public criticism of the NSF’s support of his work back then, “It sounded not very important, just a tourist attraction,” he said.

But Brock’s work at Yellowstone led to even more scientists studying “extremophiles,” microorganisms that live in extreme environments, a specialty that has unlocked theories about the origins of life on Earth and about the possibility of life existing on other planets.

“I think Tom had a catalytic effect on studies of extremophiles in general,” said Michael Cox, a professor of biochemistry at UW-Madison. “He helped get the world of biology interested in these unusual lifestyles of bacteria and all kinds of things have popped out of it.”

The expansive reach of this single discovery is also an example of the way in which science builds on itself, sometimes in the most unexpected ways. It takes years of research, by countless curious scientists, to move society’s knowledge base forward.

“I think it was the most amazing and gratifying thing I’ve seen in all my scientific career,” Freeze, now the director of the human genetics program at Sanford-Burnham-Prebys Medical Discovery Institute in La Jolla, California, said of the discovery’s impact.

“I know a number of people, friends of mine, who have said, ‘You ever want to check on the value of basic science? This is the best example, where you’re looking at something that had no application and in the right setting, with the right magic potions, you change the world,’ ” Freeze said.

In reflecting on the fruits of Brock’s curiosity, Bateman recalled a quote from another groundbreaking scientist: Louis Pasteur. “Chance favors only the prepared mind.”

It’s a sentiment Brock echoed when asked if he had any advice to give to the scientists of the future.

“Study hard and keep an open mind,” he said.

Education: As millions of kids skip kindergarten, the learning gap widens — and schools may lose funding 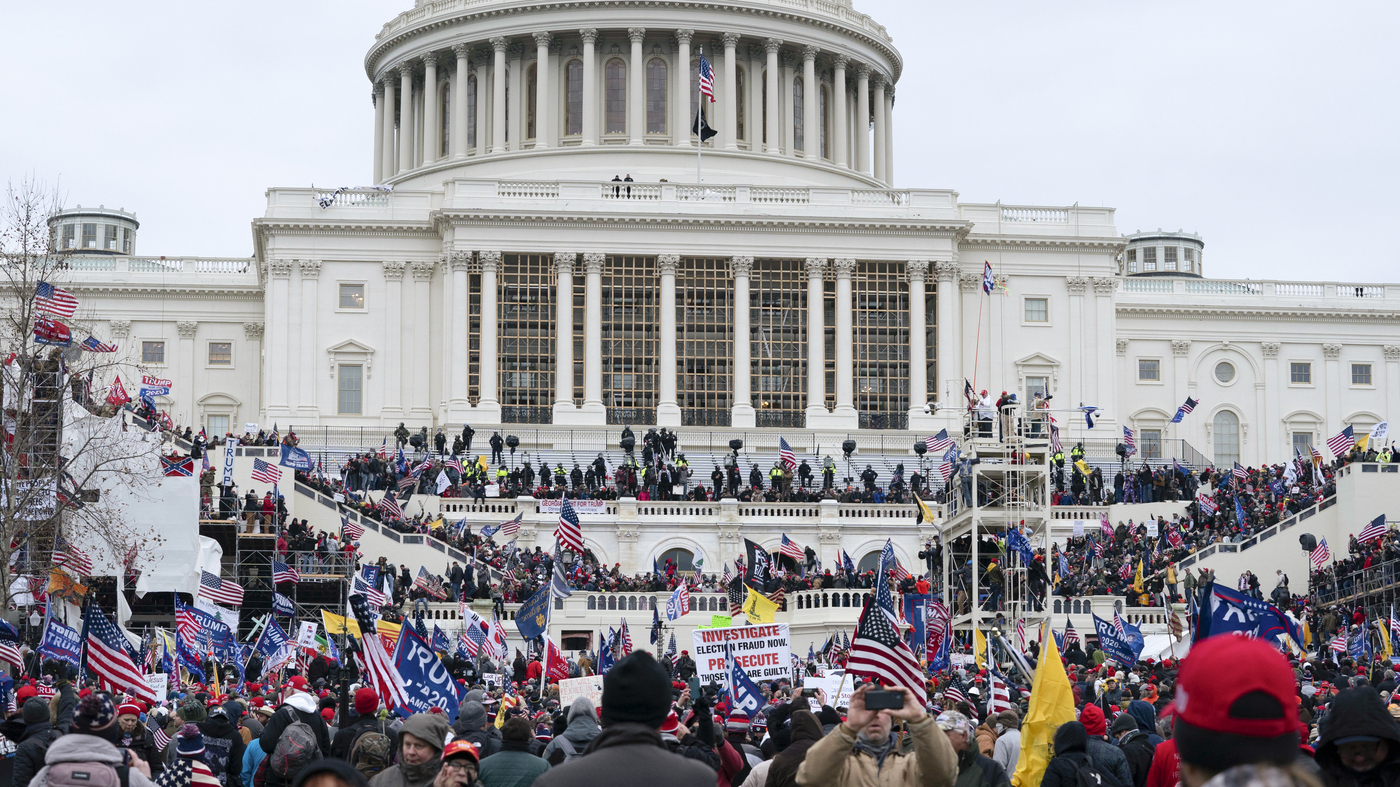 How Online Sleuths Identified Rioters At The Capitol

Live updates: US on high alert ahead of Inauguration Day as states activate National Guards at their Capitols

Lara Trump May Run For Senator From North Carolina In 2022: N.Y. Times