I thought I knew Kazakhstan. I’d been to Pavlodar, in the north-east, for its Russian cafes and its theatre named after Anton Chekhov, and I’d explored Turkestan, in the far south, with its Timurid architecture to rival the turquoise-tiled mosques of neighbouring Uzbekistan. I’d spent time in industrial Karaganda, in the vast central steppe, checking into a hotel built for Soviet cosmonauts. In the former capital, Almaty, I rented a flat and spent days exploring the city’s bazaars. Then, last autumn, deep in the far west, in a landscape as otherworldly as the moon, I realised I didn’t know Kazakhstan at all.

I’d taken a Kazakh-owned Scat Airlines flight from Istanbul over the Black Sea and the South Caucasus, to land at daybreak on the shores of the Caspian Sea at the small city of Aktau. Leaving the airport, I watched a stately two-humped Bactrian camel wander by.

A battered taxi sped me to the Grand Hotel Victory, through Aktau’s micro-districts, a grid-like maze of identikit Soviet-built eight-storey apartment blocks, each with a number painted on its facade. Addresses are mainly wordless here, all numerical, with dots and dashes. They read like phone numbers. Disorientating. Clueless.

Bleary-eyed, I walked the promenade, watching the lake-like Caspian Sea and thinking about the countries that share it: Turkmenistan, Iran, Azerbaijan and Russia. On the esplanade, past an apartment block with the city’s gear-stick-shaped lighthouse on its roof, waves slapped pale cliffs. Aktau, meaning “white mountain” in Kazakh, takes its name from this marine bluff.

A rock trail in the city of Aktau. Photograph: Alexandr Malyshev/Alamy

This city is the gateway to Kazakhstan’s untamed Mangystau region, stretching hundreds of miles into a stark interior of eroded hills and desert scrub. Through this landscape, pilgrims – fuelled by shubat, fermented camel milk sold on the roadsides by milkmaids – drive for hours to pray at the underground mosque complexes of Shopan-Ata and, a little further east, Beket-Ata. Born in 1750, Beket-Ata was an astronomer, physicist and pupil of Shopan-Ata, who became a revered Sufi and is buried here.

I was to follow the pilgrims the next day, but for now, hunger had taken hold and I wanted only to eat.

A quick Google search told me about a new restaurant serving dishes from Azerbaijan, so I flagged down a taxi. Barashka Dine & Drink is sandwiched between workshops and greasy garages, but inside, any grittiness slipped away. Scatterings of kilim cushions – the sort interior designers would fight over – lined benches and glowing jars of pickles filled niches on exposed brick walls. Bright, welcoming and utterly unexpected, Barashka is owned by Emil Akperov, a young chef who trained at some of Vancouver’s best restaurants. And just as Emil’s background has shaped his cooking, his family, he sat down to tell me, helped shape this city.

Lured by higher wages, his grandparents arrived here in the 1960s as “first settlers”, after Soviet uranium prospectors saw potential nearby. Their homeland was across the Caspian Sea in Ağstafa, Azerbaijan. Ukrainians and Russians built this city, naming it Shevchenko after Ukraine’s national poet, Taras Shevchenko: it was rechristened Aktau in 1991. Before Emil’s family came, only a few people ever passed through here: fishermen, wandering saints and hunters prepared to brave climatic extremes for fatty Caspian seals – one of the smallest in the world, and valuable for their fur and oil.

“I was born here, but growing up we’d eat mainly Azerbaijani food – salads, plov with lamb, saffron rice with raisins and dried apricots. Mum is a great cook.” His mum would also cook dolma using baby grape leaves, so today he does the same, growing his own in this challenging desert climate. Opening a restaurant in Kazakhstan’s glitzy capital, Nur-Sultan, was not an option; Emil wanted to work in Aktau, next to where his father once ran a 70-seater shashlik restaurant.

Pilgrims share lunch at Beket-Ata, where the kitchen is run entirely on donations. Photograph: Theodore Kaye

As we spoke, the restaurant grew busy and good things came to the table: a dip-like salad of aubergine, red onion, pepper, tomato and garlic, along with plov, the ubiquitous pilau rice dish with lamb, chestnuts, apricots and watercress. Bozbash, lamb meatballs in broth, is also popular, but quail, popular in Azerbaijan, did not work here – “the locals didn’t like it”. Sumac (sour, ground dried fruit from Azerbaijan and all over the Middle East) is a new flavour for Aktau, as are chestnuts. Many of Emil’s ingredients are brought from Baku’s plentiful markets, just across the sea.

The food was so inspiring I left on a high, ready for a long road trip the following day. Just after daybreak I set off with Yuri, a driver, born in Grozny, Chechnya. He radiated an air of preparedness, and a framed Orthodox saint dangled from the rear-view mirror. He wore blue jeans and a neat silver moustache sat above a row of gold teeth. “This is a real desert car. I shipped it from Dubai,” he said, starting the engine. The clock already had 500,000km on it.

We left Aktau’s coast and clinging marine air, travelling first through Karagiye, literally “Black Jaw”, a 25-mile karst depression 130 metres below sea level, the lowest point in the former Soviet Union, according to a rusty road sign. After another two hours, passing blown-over electricity pylons resembling slain steel dinosaurs, we entered the heart of Kazakhstan: the Ozen oil fields, filled with nodding donkeys. Stopping at the small, forlorn oil town of Zhanaozen, built in the 1960s, I picked up some pilgrim food to donate at the mosque kitchens – packets of dried pasta and flatbreads. The sort of food you’d take camping. Dry, long-lasting.

We drove on past buff-pink ridges, caravans of camels and white chalk ascents. Wind-carved faces appeared in eroded mountainsides and small green oases. Horses – brown, chestnut, black – would gallop past, kicking up long trails of dust. Not wild – their flanks were clearly branded – but free. Village-sized burial sites, built to honour ancient warriors and shepherds, would heave into view with fantastical funerary architecture, pyramid-style mausoleums and piles of stones not unlike the cairns of Scotland’s Munros.

‘A landscape as otherworldly as the moon’ – Mangystau. Photograph: Theodore Kaye

Then, as I took photograph after photograph from the window, Yuri pointed to Shopan-Ata. We’d arrived. A caretaker ushered us into a small refreshment room and I set down my food donation. Round as a yurt, the space had all the trappings of a nomad’s tent: willow trellis and feltwork, and in the centre of the curved roof, a reimagined tunduk, the opening at the top of a yurt to  let smoke out and light in.

Over milky tea and bread, doughnut-soft and chewy, a woman called Kausar told me she had travelled 1,400 miles in the hope that if she prayed here, her leg, maimed from a botched operation, would recover. She slowly led Yuri and me up a gravel path to the underground complex and mosque where the holy man is buried. We added our shoes to the pile of sandals and ducked through a round wooden door like a hobbit’s, cut into a hill. A shard of sunlight poured in through a hole in the roof, lighting the pilgrims’ hands, which they held up to their faces, eyes closed as they prayed quietly. In the dim interior, faith felt low-voltage and deeply personal. Asked to sit, and acutely aware how honoured we were to be invited in, we made ourselves small and silent.

Back in the light, we thanked Kausar and left, driving for another hour to Beket-Ata, where, as well as resting rooms and an underground mosque cut into a steep hill, there is a sizable kitchen. Inside, the two chefs smiled and lifted cauldron lids to show  me how their bubbling plov – with mutton, onions and carrots – was coming along.

The kitchen, running purely on donations, of everything from live sheep to cooking oil, was sparse but functional. I sat and watched as the cooks smoked, drank tea, checked the plov and filled kettles.

Dusk began colouring the mountains. We’d run out of time. To avoid the worst of the no-rules night-time driving and possible camel collisions, we needed to begin the four-hour drive back to Aktau.

Late that night, I rushed straight to Emil’s restaurant for last orders. Barashka Dine & Drink – the food so good, the comfortable setting such a balm – was my biggest culinary surprise not only in Kazakhstan but in all of Central Asia. But then, sometimes the most interesting cooking is found in the most unlikely places. Thanks to the internet and cheap flights, finding the unexpected has become harder as so much of the world becomes familiar. But that cannot be said of Aktau. And, for now, it cannot be said of Kazakhstan, either.

Aktau is a long way away – even if we could travel. For now, try making this light plov at home, from Emil’s own recipe. You could substitute lamb with a game bird such as partridge or quail.

Put the rice into a large saucepan for which you have a lid. Pour in the stock and the saffron-infused water (not the threads) and bring to a boil. Cover with the lid and reduce the heat, simmering for six minutes.

Remove the saucepan from the heat, take the lid off and, using the handle of a wooden spoon, make several holes in the rice to allow steam to escape. Then put the lid back on and allow it to steam cook for a further 15 minutes.

Heat two tablespoons of the olive oil in a frying pan over a medium-low heat and add the onion. After five minutes, add the salt and cook for a further 20 minutes until tender. Once the onion is golden, add the remaining tablespoon of oil and stir in the cumin, apricots and chestnuts, gently crumbling them into rough halves with the wooden spoon as you stir. Next, add the butter and then the lamb and cook for about 12 minutes, until the meat is browned and the juices have been absorbed.

To plate up, spoon the rice into a disc shape, then lay the lamb, chestnuts and apricots across the centre. Season, and arrange the watercress around the edges.

• Caroline Eden is the author of Red Sands: Reportage and Recipes Through Central Asia from Hinterland to Heartland (Quadrille, £26) 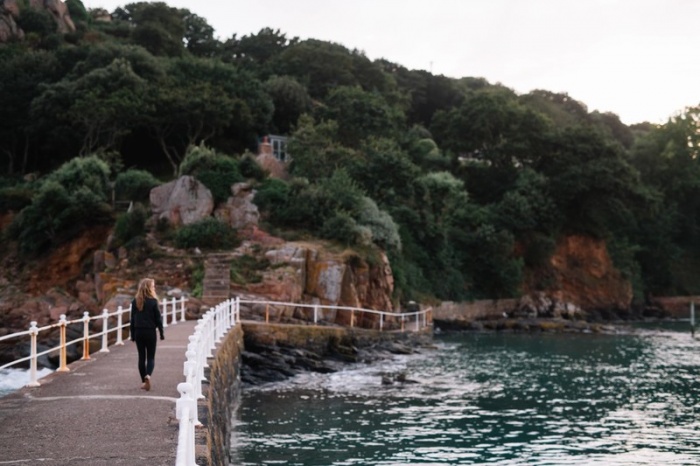 Jersey to reopen to UK-mainland travellers from next month