The assertive move last week by the Los Angeles Unified School District to mandate COVID-19 vaccinations for students — the first large school system in the nation to do so — has thrust the issue before education policymakers, especially those who support vaccines as essential to curb the pandemic.

The immediate answer for many school districts is probably not — at least not right away, amid concerns about parent opposition, litigation and the challenge of one more complication at a time when academic recovery and mental health support are imperative.

“Every district is looking at its resources, looking at its capacity and evaluating the health situation in the local community, as well as the views its community holds — trying to take all those factors into account when deciding on COVID mitigation measures,” said Troy Flint, chief information officer for the California School Boards Assn.

Many school districts are likely to adopt a wait-and-see approach — while also closely tracking how the mandate plays out in L.A. Unified, officials and experts said.

But, Flint said, “when the second-largest school district in the country takes a bold step like requiring vaccinations for eligible students, that gets people’s attention.”

L.A. Unified on Thursday, with support from all school board members, approved a plan under which students 12 and older must provide proof of full vaccination by Jan. 10, the start of the spring semester. Students who don’t will be denied access to campus and must transfer to independent study or find an education option outside the school system.

Families must act sooner if their child is to remain involved in school-associated extracurricular activities, including sports, chorus, drama and band. Their deadline for full vaccination is Oct. 31.

Both major statewide teachers unions back the mandate, as do United Teachers Los Angeles and other local school employee unions. A California Teachers Assn. spokesperson said the union “supports LAUSD and any local community that works with educators and parents to put a vaccine mandate in place for students and staff.”

Many higher education institutions, including the UC and Cal State systems, already have mandates for students, noted Jeff Freitas, president of CFT, a union representing employees in K-12 districts and colleges.

“I think that there will be more districts that follow L.A. Unified, but I don’t think it will be a vast majority,” Freitas said. “School districts are just trying to get open — and trying to figure out how to do that safely. For some of them, adding the debate about mandated vaccines might be too much to handle.”

He added that 90% of his union’s members were vaccinated and that “a vast majority of members do support mandates.”

Megan Bacigalupi, an activist Oakland parent, said she would prefer that school districts, including her own, impose a mandate on employees first.

“But a majority of California parents just want their kids’ lives to return to normal, eliminating the need for masks and any type of quarantine,” said Bacigalupi, a leader of the parent push to reopen campuses last school year. “If vaccinating children is what gets us there, I will accept it, but not because I see COVID as a material threat to my children.”

But one Culver City parent told The Times he was thinking of leaving the school system because of the mandate.

Steve, who did not want his last name used, said he and his wife were both vaccinated, and their child is vaccinated against other diseases. But, he said, a COVID-19 vaccine for children is a step too far.

“There are so many other safeguards against COVID that can happen,” he said. “I just wish we didn’t have to be extreme.”

The Los Angeles district did not conduct a survey, so parent opinion is difficult to gauge. But one indication is pediatric vaccination numbers. Interim Supt. Megan Reilly estimated that 80,000 of the district’s 250,000 students in grades six through 12 needed to be vaccinated.

“Hugely disappointed in this decision,” said the parent of a seventh-grader at Girls Academic Leadership Academy in Mid-Wilshire. “We will stay in school as long as we can, and then transition to home-schooling. Our daughter has said she is unwilling to be vaccinated, and in our family, we support young people’s body autonomy.”

He added: “We are not right-wing. We voted for Joe Biden. Our children have taken every other vaccine. But given how rushed this is, given how little we know long term, we are clear we will end our family’s relationship with public schools first.”

That sort of sentiment — if enough parents share it — is more worrisome to many school officials than the outbursts of hostility against COVID-19 safety measures, although they’re a concern as well.

The state’s school-masking mandate — a less invasive measure than vaccines — has provoked intense anger among a relatively small group of parents. On Thursday, a meeting of the Poway Unified school board in San Diego County was shut down on the advice of police after anti-mask protesters forced their way inside and refused to leave.

Mask opponents have filed litigation against both the state and L.A. Unified. Litigation over vaccines is anticipated.

Still, the Beverly Hills school board has discussed a COVID-19 vaccine mandate for students and its legal implications, Supt. Michael Bregy said. He plans to present updated information to his board Tuesday.

“The decision by LAUSD and further guidance from local, state and federal officials in recent days will undoubtedly impact this discussion,” Bregy said.

Pasadena Unified has not adopted an absolute student mandate but will require students 12 and older either to be vaccinated or submit to weekly coronavirus testing. Children under age 12 — who are too young to be vaccinated — will have weekly testing. L.A. Unified requires all students and staff members to be tested weekly, regardless of vaccination status.

In northwest L.A. County, Las Virgenes Unified schools Supt. Dan Stepenosky said that personally he was “all in” on the safety and effectiveness of vaccines. But previous student vaccine requirements have come from the state, and he said he was not prepared to mandate student vaccination in his 10,000-student district.

“School districts are not public health agencies,” said Stepenosky, who has consulted with attorneys over the matter. “We don’t have public health officers — so restricting or eliminating access to schools based on medical requirements places districts in a tenuous legal position. A district that goes forward with policy in an untested area of law, especially one as serious as excluding students, opens itself up to serious legal exposure. Excluding students from school is a very serious step and not to be taken lightly.”

“The district believes it has the right to do what it needs to for protection of the safety of its students, and it probably would find California courts agreeing with it,” Bowling said. “Schools have many safety requirements.”

Those opposed, he said, are skeptical of vaccine safety while also emphasizing personal freedoms that have legal standing: “There are numerous lawsuits around the country on public and private vaccine mandates that have yet to play out.”

He also said that an aggressive safety measure in L.A. could add to the fury of opponents in parts of the country with different politics.

“Unfortunately,” Bowling said, “like everything else in this country, it has become a red state/blue state struggle.”

A state mandate would “provide a measure of authority” that local school board members could point to, said Flint of the California school boards association. “On the other hand, there are a lot of areas throughout the state that would not welcome a mandate that reflects what L.A. did. There’s a lot of division.”

Flint added: “School board members are under unprecedented duress.” As it relates to COVID-19 safety measures, “the hostility that we’ve seen at board meetings is several leagues beyond anything that’s been experienced.”

In L.A. Unified, a Thursday news conference on the mandate was moved from the ground-floor cafeteria to the 19th floor of district headquarters after anti-vaccine protesters began pounding on windows.

In other quarters, the L.A. move has elicited quiet admiration.

The L.A. Unified action “is a very welcome development,” said Kevin Stange, director of the Education Policy Initiative at the University of Michigan’s Ford School of Public Policy, which has looked at how safety concerns have affected schooling. “L.A. Unified is following the hundreds of colleges and universities — such as my own institution — that have implemented a vaccine mandate to ensure a safe place to learn and work.”

County health leaders have praised L.A. Unified for adopting a helpful public health measure that emphasizes the importance of vaccines, although they have not pressured other school systems to do likewise. Fauci says drop in Covid cases not due to vaccine: ‘We don’t want to get complacent’ 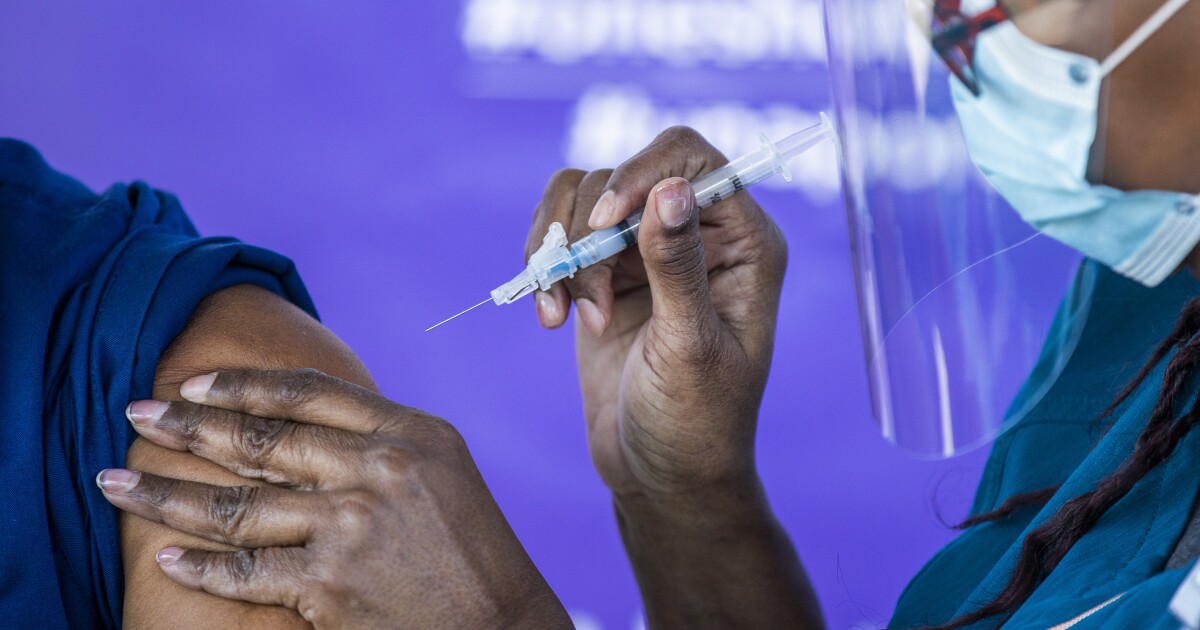 Column: My dad was a COVID-19 skeptic. But he got vaccinated, and so can your pandejos Column: Need a COVID-19 vaccine? These Californians are helping others book appointments

Column: He’s been a target of anti-vaxxers. Now he has a warning for the rest of us