Hospitalizations are continuing to rise at unprecedented levels, and officials have limited options for boosting capacity. Among the tools: Canceling scheduled surgeries; keeping critically ill patients in emergency rooms; sending ICU patients into step-down units earlier; training nurses from elsewhere in hospitals to help with intensive care; and increasing the numbers of patients an ICU nurse can treat.

California has recorded a cumulative 1.65 million coronavirus cases and more than 21,400 COVID-19 deaths. The state has far fewer cumulative cases and deaths per capita compared with other states, but a surge in infections related to pandemic fatigue and Thanksgiving has resulted in the worst wave of the pandemic so far.

In Los Angeles County, emergency rooms are so crowded that some ambulances have been forced to wait as long as six hours to offload patients, said Cathy Chidester, director of the Los Angeles County Emergency Medical Services Agency. Some patients arriving by ambulance are asked to sit in the emergency department lobby so the ambulance can depart.

California is also desperately seeking more medical staff from overseas, perhaps from as far away as Australia, while opening field hospitals to care for non-ICU patients in places such as Costa Mesa, Porterville, Sacramento and Imperial; other facilities are on standby status in Riverside, Richmond, Fresno, San Diego and San Francisco.

Officials around the state said that hospitals are sinking into a crisis state, but that a widespread overwhelming has not yet occurred.

“Our healthcare system is quite stretched: Not yet to the breaking point, but steadily marching towards that point,” said Dr. Sara Cody, the Santa Clara County health officer.

Some regions, including Los Angeles County, have enough physical bed capacity but are running very low on the staff needed to care for patients.

But there are limits to how much hospitals can expand. They can expand, like a water balloon, to meet a certain level of demand, said Dr. Ahmad Kamal, Santa Clara County’s director of health preparedness. But they’ve already expanded a great deal, and yet “there’s more and more stress being put on these hospitals.

“And like a water balloon, when it explodes, it’s not subtle.”

Some counties have asked the state for additional staffing help, but there is just not enough available staff for the enormous demand. “They’re not able to fill all the requests that we’ve got,” said Shane Reichardt, spokesman for the Riverside County emergency management department.

“The situation is obviously getting worse,” Reichardt said. “No matter where you stand politically, it’s fairly undeniable that when people start getting together and congregating over holidays, et cetera, we see a corresponding bump in the number of cases.”

‘We have very dark days ahead’

The state’s supply of nurses has been focused on skilled nursing facilities for good reason, Kamal said, but that’s leaving hospitals on their own when it comes to staffing surge beds.

The shortage of staff can simply mean that exhausted doctors, nurses and respiratory therapists just work even more, raising the risks of mistakes and poorer standard of care, given that they’ve been on the front lines for 10 months of the pandemic.

“We have very dark days ahead,” Cody said in tearful remarks to the Santa Clara County Board of Supervisors on Tuesday. “We are truly, truly in the worst place we have ever been in this pandemic by a very large margin.”

The nightmare scenario is one in which ICU capacity is so overstretched that instead of two or three patients assigned to each ICU nurse, they’re forced to watch over seven patients — the kind of overwhelming workload that can increase mortality for not only COVID-19 patients but also other critically ill patients. There have been overwhelmed hospitals across the world during the pandemic, such as in New York City and northern Italy, where the death toll was severe.

One major challenge is that COVID is surging in so many places that officials have few places to turn for help.

Expecting the pandemic to worsen before it improves

Hospitals are starting to pursue strategies that involve moving nurses who normally work in the emergency room or the step-down unit where critically ill patients recover into the ICU after receiving some training, Chidester said. Licensed vocational nurses and certified nursing assistants would then take a greater role elsewhere.

Chidester is still urging that people who need to come to the emergency room do so; someone suffering a heart attack needs to call 911.

L.A. County is so slammed by COVID-19 patients that for certain periods of time Sunday, 81% of hospitals that received patients coming from 911 calls were forced to divert some of them elsewhere, said Dr. Christina Ghaly, L.A. County director of health services.

L.A. County has more than 4,600 people hospitalized with COVID-19, and officials said that number could rise to 5,000 by the weekend.

“We need to brace ourselves that this [hospital] case volume has not yet reached a peak and will keep growing,” Ghaly said.

Medical authorities across the state expect the situation to worsen before it gets better, as more people infected during the Thanksgiving holiday fall ill. The hope is that the state stay-at-home order will eventually turn the tide, but it’s expected it will take until Christmas or New Year’s before the inexorable rise in daily coronavirus cases flattens or begins to decrease.

“We are concerned about what our ability to provide the same level of high-quality care will be,” said Dr. Mark Ghaly, the California health and human services secretary. “What we are really preparing for is two weeks from now.”

Gov. Gavin Newsom said the state had to order 5,000 additional body bags, and he implored residents to take the virus seriously and to stay home as much as possible. “We are not at the finish line yet,” he said. “So please, please, please be mindful.”

Dr. Rais Vohra, Fresno County’s interim public health officer, said Tuesday that he expected “a grim set of weeks before and after the New Year, just given the trends that we’re seeing…. Unfortunately, we’ve just got a lot of infections and a lot of ongoing transmissions [and] we’re still very, very hard pressed to try to meet that challenge.”

Fresno County has nearly 1 million people, but there were only 16 available ICU beds Monday. A couple of that region’s larger hospitals have zero available ICU beds and one has been forced to keep five ICU patients in the emergency department.

Vohra said the staffing shortages in Fresno County already feel similar to what New York City faced in the spring. He said
it’s entirely plausible that Fresno County will need to utilize more alternative care sites and tents if “we’re running out of spaces in the hospital to put people and we just need to make space.”

Besides an alternative care site in Porterville that opened Monday, another staffed 50-bed care site is being opened this week next to Community Regional Medical Center in Fresno. That site can take patients from in-patient wards, freeing up space in the step-down units where critically ill patients recover, which in turn frees up space in the ICU.

‘People are going to die that don’t need to die’

The deteriorating conditions in hospitals and long hours by doctors, nurses and others contributes to concerns about care.

“That is what makes the situation that we’re in so anxiety-provoking for people in healthcare,” said Dr. Kirsten Bibbins-Domingo, chair of UC San Francisco’s department of epidemiology and biostatistics. “The level of concern you hear from the ERs, from first-line healthcare providers, is completely different than in March…. None of us ever want to be in a condition where the type of care we’re providing is not the highest level of care.”

In Ventura County, intensive care unit capacity has dropped to 1% and officials are speaking out against parties, indoor church services and youth sports events that they say are making the crisis worse. COVID-19 hospitalizations in the county have broken records for at least 10 consecutive days.

“The numbers are getting to be astronomical,” said Dr. Robert Levin, the county health officer. “People are going to die that don’t need to die.”

Two weekends ago, there were some 80 football players gathered at a park in Simi Valley. Sports tournaments are occurring in other counties involving volleyball and baseball players, and in those situations, people weren’t wearing masks, Levin said. Some church services are also still being held indoors in violation of the state rules, with worshipers sometimes sitting shoulder to shoulder.

At the Oaks Mall in Thousand Oaks, there was a report of hundreds of people gathering to sing Christmas carols, many without masks, Levin said. And he’s heard of parties of up to 200 people attending drive-in concerts — organized expressly to allow for social distancing — only to get out of their cars.

Singing is an extremely high-risk activity and has been documented to spread the coronavirus. One choir practice left dozens infected and two people dead in Washington state.

“What’s understandable about this?” a frustrated Levin said at a news conference. “None of these justifications are acceptable in the face of the pandemic. We all need to be working together, just like we would be fighting any war.

Dr. Mark Lepore, an intensive care physician at Ventura County Medical Center, said he expects the county to exceed hospital capacity, “and what exceeding capacity looks like is showing up to the hospital and not having a room to go into or not having a staff member to take care of you.”

He urged people to avoid gathering for Christmas: “Just tell them you’ll see them next Christmas. This is that important: We don’t want your family members to get sick and not be able to get care.” 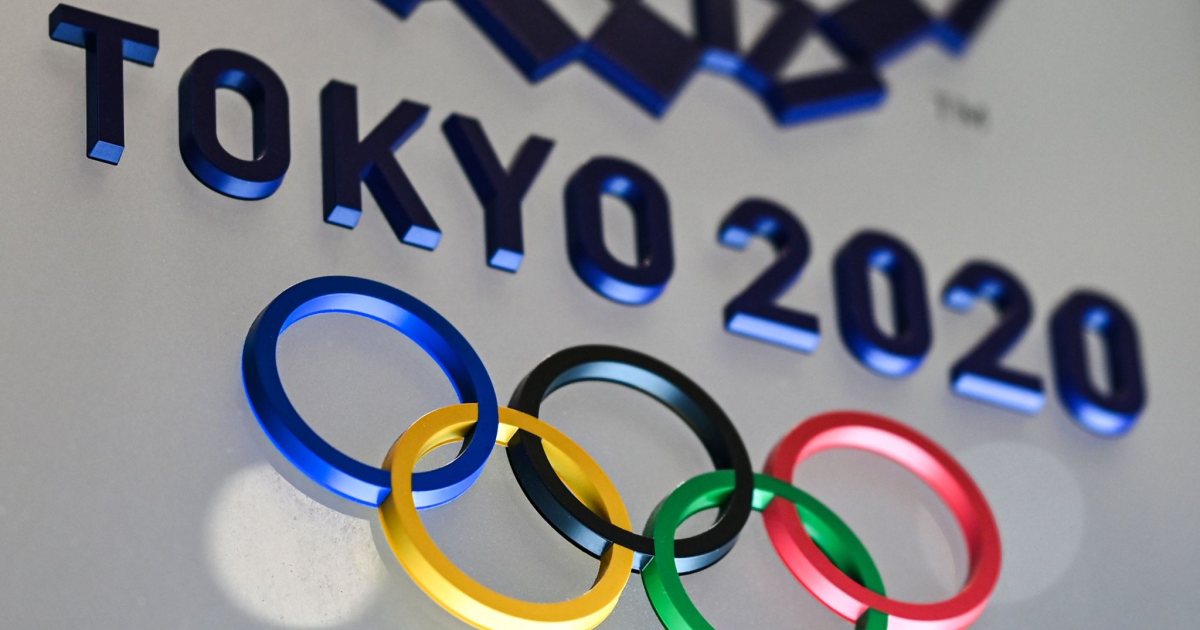 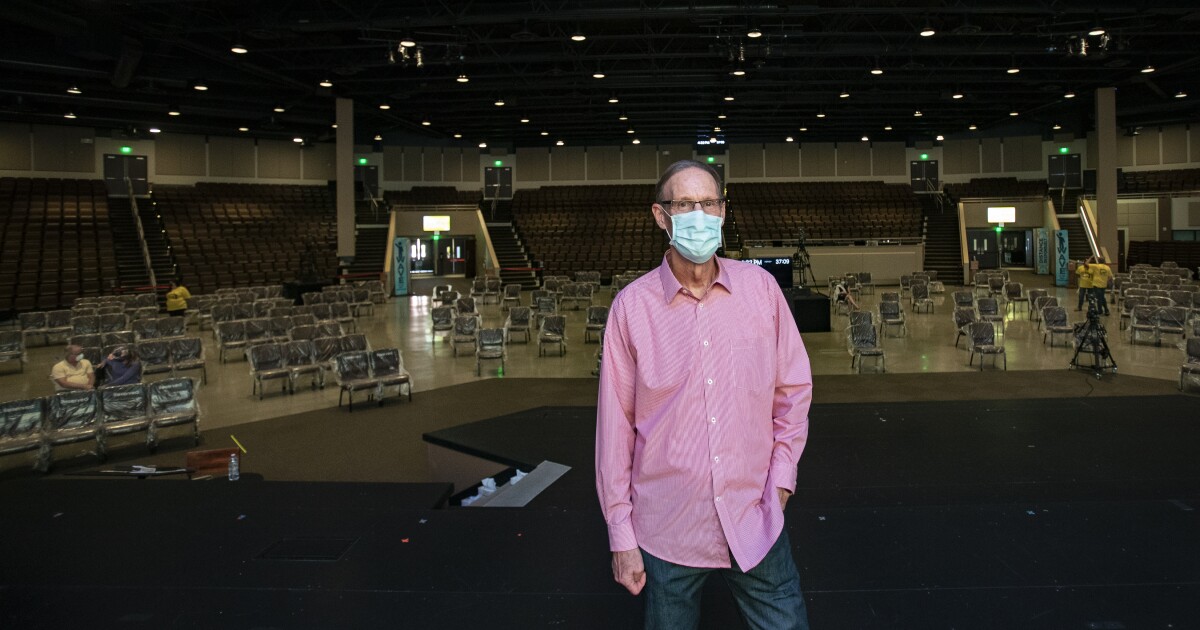 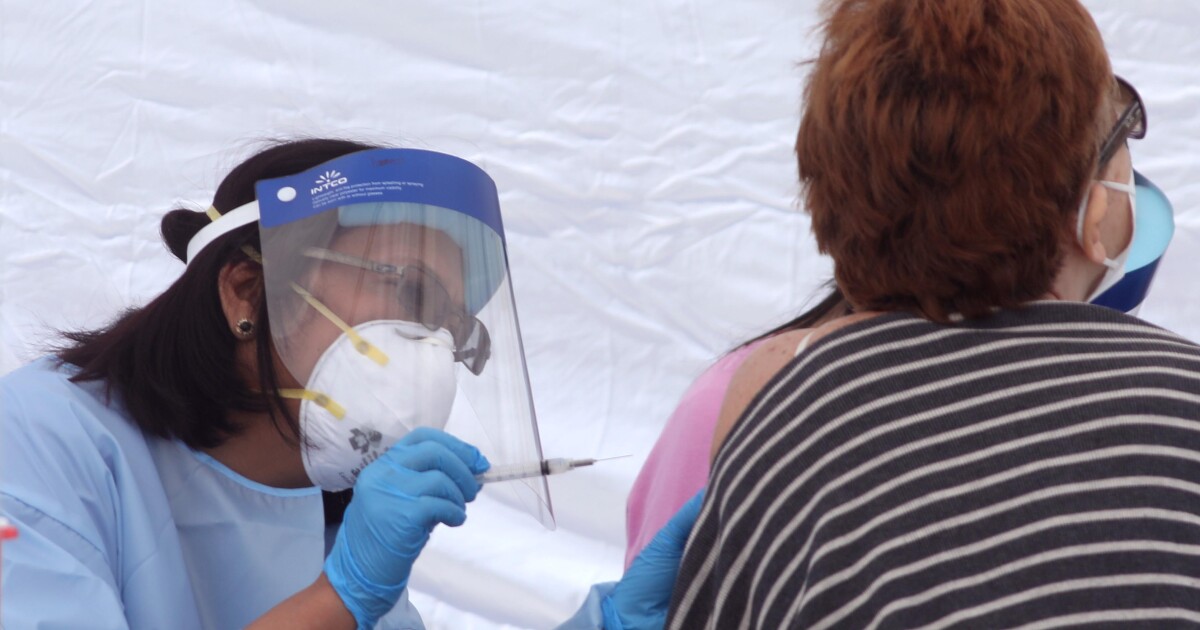 Column: Is it right to vaccinate cannabis workers before teachers? That’s what we’re doing 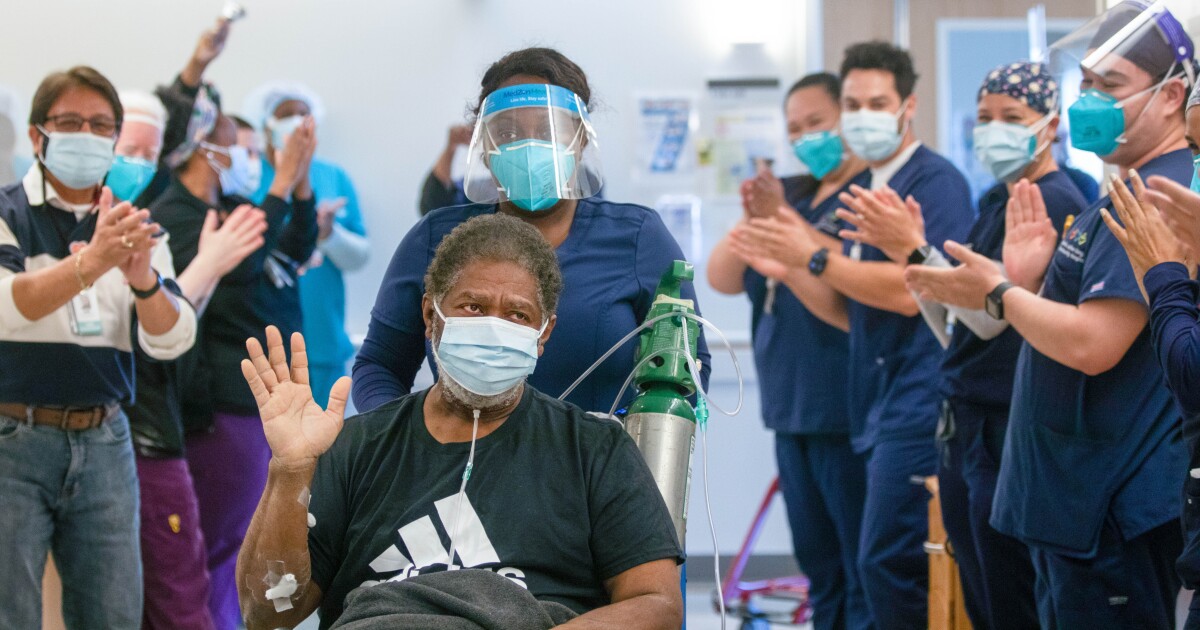