“She just picked up the flogger and started twirling it around like she knew,” Snakeoil said. “She definitely knew how to use a flogger and I was like, ‘I wanna be your friend.’ She ended up with some of my old dungeon supplies, and we connected, and I just kept going back to her and taking her stuff and slowly developing a relationship.”

“It was so important for me to use ‘Home Street Home’ as a form of activism for people who didn’t have a voice, and then at some point I really felt like it was important to not just write, but also to do direct action,” Snakeoil said.

She created the Sidewalk Project, a nonprofit dedicated to using art and music in public health initiatives for unhoused people. (“We use the words ‘houseless’ or ‘unhoused’ because we believe that the word ‘homeless’ has a lot of stigma to it,” Snakeoil said.) And while L.A.’s COVID-19 case count drops as vaccines roll out and optimism builds toward a post-pandemic future, the hustle does not ease for these street-savvy punk rockers who remain bound to their unorthodox outreach and their mission to help those who are still very vulnerable.

Snakeoil started the Sidewalk Project alongside Stacey Dee, guitarist of the band Bad Cop/Bad Cop, and Emily T. Nielsen, founder of the art collective and management group Punk Rock & Paintbrushes. In true DIY fashion, the women initially just handed out lunches that they prepared themselves. Then they connected with Crushow Herring, an L.A. artist, activist and rapper who used to sell drugs on skid row and lived there at one point. Herring stopped dealing drugs in 2006 when his son was born and now maintains his ties to skid row through activism.

“He services his community down there and is a real leader,” Dee said. “He walked us into the skid row community and really made what we do legitimate. He gave us the opportunity to be looked at as an ally, not as somebody trying to move in.”

With his support, the punk rockers were able to build trust in skid row to better understand how to serve people’s needs.

“My whole thing,” Herring said, “is to do something big here in skid row where we bring enough noise. I told them, ‘You guys bring the punk rock community, I have the hip-hop community.’”

The Sidewalk Project started organizing fundraisers with Punk Rock & Paintbrushes, auctioning art by musicians in prominent bands like Blink 182, Social Distortion, the Offspring and the Vandals. Most significantly, the Sidewalk Project began throwing monthly block parties where unhoused people could access essential resources while having the rare bit of fun.

Before the pandemic, these parties provided unhoused people with art activities, musical instruments and an open mike so that they could play or sing for the crowds.

“Art and music are a form of harm reduction,” Dee said. “If someone gives a little bit of their time to something that makes them feel good and that they really enjoy — through creating or singing — that reduces the harm in a day that may have otherwise not been that great for them, so we look at music and art as being part of our harm reduction strategy.”

The National Harm Reduction Coalition defines harm reduction as “a set of practical strategies and ideas aimed at reducing negative consequences associated with drug use.” The NHRC further defines it as “a movement for social justice built on a belief in, and respect for, the rights of people who use drugs.” Incorporating harm reduction was particularly important to Dee and Snakeoil, who had overcome drug addiction before starting the Sidewalk Project.

“My journey to sobriety was a harm reduction journey,” Snakeoil said, and it’s one of the reasons she’s so passionate about the topic.

Dee’s experience was rooted in childhood. Dee’s parents were partiers, she said, and illicit substances were always around. She said she remembers watching her parents doing lines of cocaine on a telescope lens at home. “I would follow my mom around the house and she would wipe her hand on it, rub it against her gums, and I would do the same. … She wouldn’t see me, but that’s how you learn,” Dee said.

Dee got clean in 2015 after a ruinous incident on tour left her hospitalized.

“My band had an intervention. They came to me and said, ‘You need to get better or we’re not gonna be in your life anymore,’ and I’m so grateful that they did that because I had something to lose,” Dee said. “My music was always the most important thing in my life, and Sidewalk Project now is just as exciting.”

When COVID-19 ended the parties, the Sidewalk Project hit the streets to distribute essential supplies and to connect people to services they might want, including obtaining medications for HIV or heart conditions, finding treatment for syphilis or pneumonia, or getting an abortion, Snakeoil said.

Snakeoil is out every day for approximately four hours at a time, and the rest of the team joins her each Sunday for five hours.

Ricky Rosales, who works in the city of Los Angeles’ AIDS Coordinator’s Office, said the Sidewalk Project is the first mobile syringe exchange program since 1994 to be approved for harm reduction services. The project gets dirty needles off the street and exchanges them for sterile ones.

“It’s a big deal,” Snakeoil said, “and I think that the reason we got approved is because the need is big in this time of COVID. There’s a lot more overdoses, and we’re at a syndemic between poverty, systemic racism, HIV, Hep-C and COVID all coming together at one time. It’s a crisis situation in society, and also, we want people to stay in place. So if a mobile exchange can go to people and bring resources, then there’s not as much crowding in locations or lining up, so it’s a good model for COVID.”

The Sidewalk Project also has been dedicating time to efforts like installing handwashing stations across skid row, accomplished with a grant from the state. Art activities for unhoused people have continued through the painting of murals around the city.

The punk rockers also have turned their attention to moving Russia off the street and into a camper. With the help of social media, they received a donated RV, but it needed critical renovations.

The group couldn’t find the right kind of free skilled labor to get the RV fixed. “Then her tent caught on fire and she was burned in the process,” Snakeoil said. “Then someone drove by — this is really sad, but sometimes people will drive through skid row and shoot people with pellet guns as sport — and that happened to her right after her tent caught on fire. And we were like, we can’t mess around anymore.”

The group raised enough money to buy another camper and said Russia is living comfortably in it. The original RV was sent to the unincorporated squatter community in Imperial County known as Slab City, where it was given to a pregnant woman in dire need of housing.

The Sidewalk Project continues to grow and has chapters in San Diego, Orange County, Las Vegas and Phoenix. It’s even been able to hire people from skid row, like Russia, to help maintain the new handwashing stations or support staff with distributions. But it’s looking for more funding, so it’s collaborating on a multi-artist punk rock cover of “Lean on Me” to raise money, which will be released this spring.

Morse: The Left Politicized and Racialized the Boulder Shooting, Now Its Racism Is Exposed

How to pre-order the OnePlus 9 and 9 Pro | Engadget

This season’s flu vaccine was a poor match for the virus, CDC reports 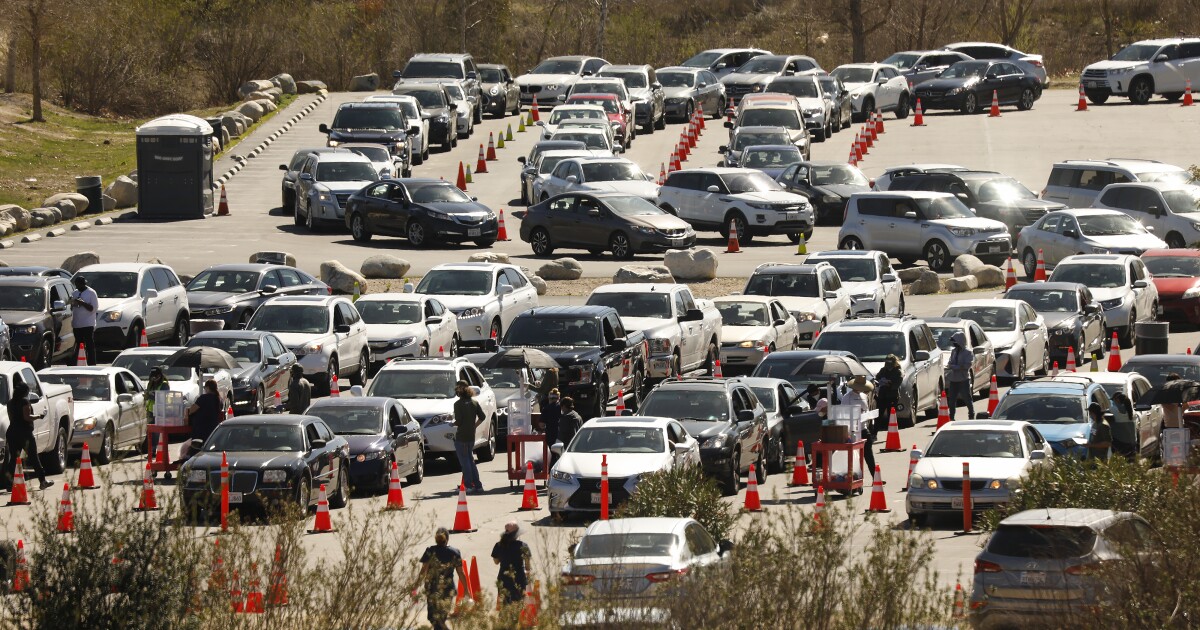 Letters to the Editor: A vaccine rollout for affluent white people who drive Ignore, explain or fight back? How Asian Americans deal with racism