On the drive back from the first weekend of this year’s Coachella Valley Music and Arts Festival, Liz Sánchez felt more run-down than usual. Sánchez, an L.A. resident in her mid-20s, said that as she first walked through the gates to see headline acts like Harry Styles and Billie Eilish, she felt nervous about returning to crowded music festivals, even outdoor ones.

“After hearing about Coachella lifting all of its COVID-19 restrictions, I almost sold my ticket,” she said. “My friends were determined to go, though. No one seemed to be worried about getting COVID-19.”

By the time she got home, Sánchez feared that she had come down with more than post-fest exhaustion. “I got tested a couple days later, and it was positive for COVID-19,” she said. “I wish I wore a mask for at least part of the weekend.”

While fans have waited two years to fully cut loose at clubs, arenas and festivals, some acts and public health experts are wondering if it’s too soon to abandon safety measures such as masks and vaccine mandates.

“We can’t just go back to 2019,” said Melanie D. Sabado-Liwag, a professor of public health at Cal State L.A. She’s also a Coachella-goer and occasional EDM DJ by night, and fully understands the allure of a masks-off music gathering. “We have to create a new norm where we assess the environment. Even outdoors, there’s still some risk. You might be walking by someone without a mask who is unvaccinated. You just don’t know.”

Almost no one expects a return to the harried days of 2020 or even the wobbly optimism of 2021 — live music, and the financial sustenance it provides artists, touring personnel, venues, promoters and areas like the Coachella Valley, is definitively back. When masks are no longer mandatory even on airplanes, it’s hard to see the music industry taking a harder line after two years of economic mayhem.

“I don’t see how the concert industry is going to do what government and society haven’t been able to do, which is enforce mandates,” said live music veteran Randy Phillips, former head of AEG Live. “At this point, we’ve got to live with it.”

Fans seem to feel much the same way. In a TV interview last month, Live Nation Chief Executive Michael Rapino said, “Tickets seem to be flying out of the door, both from the front seat to the back. So we’re looking still for a record 2022 across the globe.” A representative for Live Nation said that 2022 will likely beat a record-setting 2019 in revenue and show counts. The promotion giant says that they already have more than 40 tours prepped for 2023, well over the typical five to 10 typically booked by this time in the calendar year.

Over the spring and summer of 2022, Coachella promoter Goldenvoice, owned by AEG Presents, has festivals Cruel World, Just Like Heaven, Palomino and This Ain’t No Picnic coming to Pasadena, with the Latin-focused Viva L.A. slated for Dodger Stadium in June. Live Nation has EDM and hip-hop staple HARD Summer and the L.A. debut of Barcelona’s Primavera Sound planned this year as well. Representatives for both promoters said all upcoming festivals will abide by state and local regulations at the time of the show, which, as of now, only recommend masks and vaccines for indoor events.

But the CDC’s most recent COVID-19 tracking report said that national cases this week are up more than 35% over the prior seven-day period. L.A. County’s public health director Barbara Ferrer said last week that “the entertainment industry is overrepresented in our reports of recent worksite clusters.”

From indie acts like Car Seat Headrest and Bartees Strange to major stars like Justin Bieber, J. Balvin, the Fugees, Avril Lavigne, Willie Nelson and Elton John, many artists have postponed recent dates after contracting the virus themselves, a crew member falling ill or simply from an abundance of caution.

Locally, some popular clubs like the Troubadour and the Echo still require vaccination and masks in certain settings to attend shows (though enforcement of the latter is spotty at best).

“All is as well as it can be, everybody and and their mother is touring now,” said Christine Karayan, owner and general manager of the Troubadour in West Hollywood. “Based on the chatter and emails from the city and county, I think they’re preparing us to bring some mandates back. But there’s definitely fatigue.”

“The unknown always creates insecurity in any business, and it is a problem we’re all trying to figure out,” Phillips said. ”One thing you can’t control is the impact on consumers and ticket sales. 2022 and 2023 are going to be massive touring years, everyone’s back and cannibalizing as many dates as the market can bear. Layer on top of that insecurity of new surges, and now it’s a a crapshoot.”

For artists and crews on the front lines of the live business, COVID-19 diagnoses can mean weeks of lost work and isolation expenses far from home. “Please wear a mask tonight so we can stay on tour,” Coachella performer Phoebe Bridgers wrote on social media earlier this month.

Singer-songwriter Bob Mould, 61, was vigilant about COVID-19 protocols since 2020, and he was triple-vaccinated when he returned to the road last year. “We took it very seriously from the beginning. We did everything we could possibly do to make sure we didn’t get it,” including scaling back to smaller solo sets, near-daily testing, no backstage guests and demanding masks and vaccines at many of his shows.

“But we’re all hurting for work. A lot of big industries got lots of money from the government. Musicians didn’t,” noted the former Hüsker Dü frontman. Mould relaxed the mask policies for a recent show in the Bay Area, and just days later, he tested positive for the coronavirus.

“I blame myself for not being enough of a hard ass,” Mould said, while isolating in Seattle. “I don’t think there’s any question we have to be wearing masks when we congregate indoors with drinking and yelling and singing.”

Masks and vaccine mandate checks may be annoying for fans and artists finally venturing back out after years with no shows, but Mould doesn’t see it as a choice. “I feel for newer artists on smaller tours on thin margins to begin with,” Mould added. “But my conscience wouldn’t let me live with myself knowing I exposed anyone to illness. I’m not booking full-band tours again until we get out of this.”

Contracting the coronavirus can be costly, both physically and financially. Haley Fohr of the Chicago orchestral-indie project Circuit Des Yeux tested positive while on tour in Europe nearly three weeks ago, and had to rent an AirBnB in Cergy, France to isolate for two weeks. “I do feel a large wave of worry in the music community right now,” Fohr, 33, said. “We no longer have unemployment, grants and societal empathy like we did at the beginning of the COVID-19 pandemic. I lost a significant amount of money from having to cancel midtour. It really feels like gambling.”

Alan Sparhawk, of the acclaimed indie band Low, postponed dates after his band tested positive this month. “Bands are worried,” he said. “Most of the money coming in goes out in expenses, so a cancellation becomes a big loss. Crew need to be paid, gas and hotels purchased. Even cautious bands like us are having to make hard decisions to make a living.

“It would be nice if venues and promoters were all on the cautious side, but that’s understandably impossible,” he added. “We ask our fans to mask, and sometimes it works. If it seems like most people are masking, the rest will follow suit, but it works the other way too. People follow the crowd.”

As federal and local governments drop nearly all rules around gatherings, some acts have decided they can live with the risks.

Mike Kerr, the singer for the U.K. rock duo, Royal Blood, had just played the biggest headlining show of his life at London’s O2 Arena on March 30. The next day, he tested positive for the coronavirus and postponed the rest of his band’s U.K. and Europe dates.

“There’s always a COVID-19 shadow following you,” Kerr said. “Canceling dates is the worst feeling in world, and coming to a show in this climate isn’t simple. We announced our shows in the U.K. a year before played, and to cancel them two days before, I can’t help but feel my it’s my fault.”

Royal Blood will still be playing the Novo in downtown L.A. on May 5. Kerr understands both sides of the safety debate — some artists and fans will want to mask up or even stay home, but others are desperate for the release (or the income) of a live show.

“I want fans to enjoy themselves, and it’s not up to us to tell them what to do,” said Kerr. “If people have concerns, it’s OK to just not come. But most people want the full experience, they want the freedom and liberation of being at a show. We serve as a distraction from the world, to forget all the s— going on for an hour and a half.”

Sabado-Liwag is sympathetic to fans’ whiplash about safety policies, especially as many institutions and industries have more or less left responsibility up to individuals. “We want things to be consistent, but the science never is,” she said. “That’s the reality of where we are.”

Our Favorite Cosplay From Romics 2022

Fauci says U.S. is transitioning out of ‘pandemic phase’ 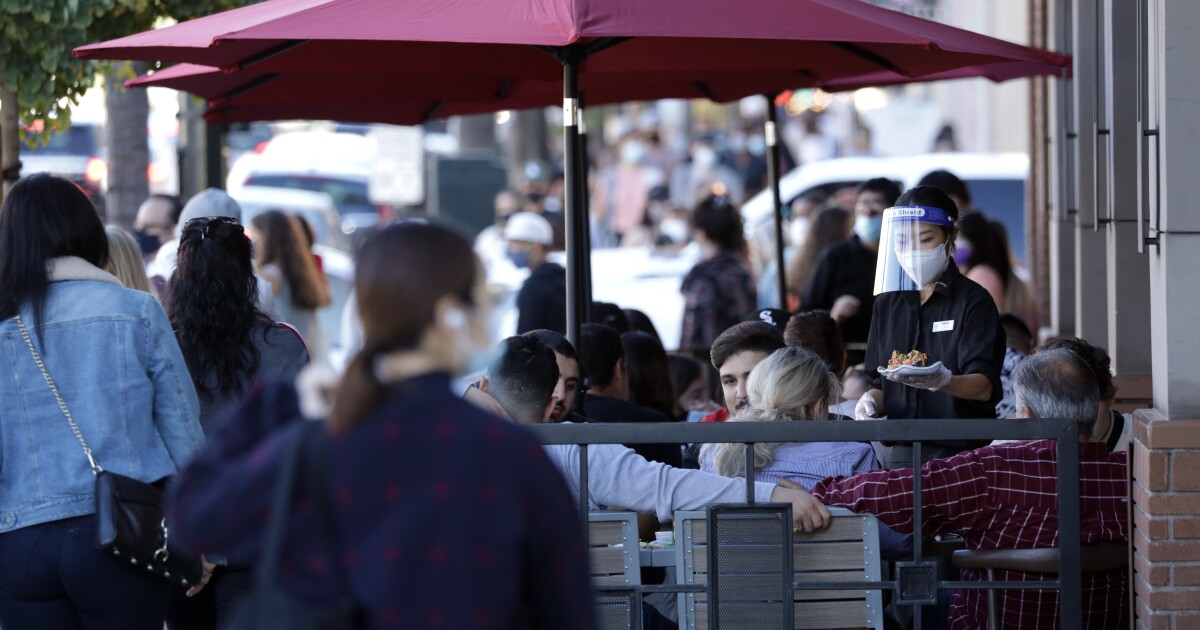