Alfresco is no longer the only dining option at San Francisco restaurants.

In Silicon Valley, residents can exercise inside a gym.

And Los Angeles County, along with the rest of Southern California, is closer than it’s been in months to removing the proverbial padlock from its economy.

As daily coronavirus cases plunge, California is barreling toward what would be the widest reopening of businesses, schools and public spaces since the horrific surge of the fall and winter.

But even with cases falling and vaccine distribution efforts slowly gaining steam, there are questions about whether the state is moving too fast.

The coming months remain uncertain because of the emergence of new variants of the coronavirus, which have the potential to spread faster than shots can be inserted into arms.

Just this week, Dr. Rochelle Walensky, director of the U.S. Centers for Disease Control and Prevention, said she is “really worried about reports that more states are rolling back the exact public health measures we have recommended to protect people from COVID-19.”

In California, daily coronavirus cases are still declining, but at a slower rate than last month. The state is currently recording about 5,200 cases a day, a decrease of 23% from last week. In mid-February, the week-over-week drop was 37%.

The paradox has lingered throughout the pandemic: How can it be safe to open up when you’re still asking residents to batten down?

“If we could learn from these things and practice moderation — not go straight from ‘no’ to ‘yes’ on all fronts, then maybe we can mitigate transmission,” said Dr. Shruti Gohil, associate medical director of epidemiology and infection prevention at UC Irvine. “But it’s hard. How do we message that nuance?”

When it comes to COVID-19, it’s not always a matter of “you open, you don’t open. Maybe you open with restrictions,” she said Tuesday.

That distinction, however, risks coming off as a mixed message — especially to pandemic-weary Californians eager to shed the shackles after almost a year of worry, disruption and limitations.

Rita Burke, an epidemiologist and assistant professor of clinical preventive medicine at USC’s Keck School of Medicine, said it “has to be crystal clear that, yes, we are opening up — but that in no way means we can become complacent and start letting our guard down.”

It does no good, she said Tuesday, if “people just hear the first part and they’re already out the door, and they miss that really important second part.”

Eighteen counties — home to more than 5 million Californians, 13% of the state’s population — have exited the purple tier, the strictest level of the four-category reopening plan, freeing businesses to throw open their doors and residents to walk through them to dine, exercise or view works of art.

And notably, L.A. and Orange counties are mere decimal points — and a bit of waiting — from doing the same.

With spring around the corner, new hope has sprung in the Golden State: that with a swelling stream of vaccine and weeks of plummeting transmission rates, California can move steadily closer to something resembling pre-pandemic life.

“We are in an amazing place,” said a jubilant San Francisco Mayor London Breed at an outdoor news conference Tuesday. “We are not completely where we want to be but better than we have been since October of last year.”

Gov. Gavin Newsom said Tuesday that the gains the state has made in recent weeks are a credit to Californians who took the steps necessary to tamp down transmission, such as wearing masks in public and maintaining physical distance from members of other households.

Should residents maintain their vigilance, Newsom said, the state “won’t see that reclosing, reopening construct” of earlier in the pandemic.

In California’s reopening blueprint, counties are assigned to one of four color-coded tiers based on three criteria: average daily coronavirus case rates, adjusted based on the number of tests performed; the testing positivity rate; and a health equity metric intended to ensure that the positivity rate in poorer communities is not significantly worse than the county’s overall figure.

Counties must meet the next tier’s criteria for two weeks in order to advance.

In the purple tier, many businesses and public facilities have to suspend or severely limit indoor operations.

L.A. County, long the epicenter of California’s coronavirus outbreak, now meets two of the three criteria for advancement. The only sticking point is adjusted case rate.

In a statement to The Times, officials at the L.A. County Department of Public Health said they are hopeful the region can enter the red tier in two weeks. Along with wider business operations, this would allow grades 7 through 12 to resume in-person classes.

Orange County also is waiting for its case rate, most recently calculated at 7.6, to fall enough for it to move to the red tier. The county’s case rate last week was 11.9, down from 20.7 the week before.

Despite the progress, some health experts fear that another surge could hit before enough people have been vaccinated to stop it.

“We have the ability to stop a potential fourth surge of cases in this country. Please stay strong in your conviction. Continue wearing your well-fitted mask and taking the other public health prevention actions that we know work,” Walensky said.

California has been far more cautious in reopening businesses than the nation’s other most populous states. But some experts say a wider reopening here can’t be pushed off forever.

“At some point, you have to make the decision — evidence-based, based on science, based on what we know — that it’s safe to move into the next tier,” Burke said.

Gohil, too, said it’s not a matter of, “Let’s isolate ourselves forever.” But, she said, “if we play our hand correctly now, we can really do a lot of good for a lot of people.” 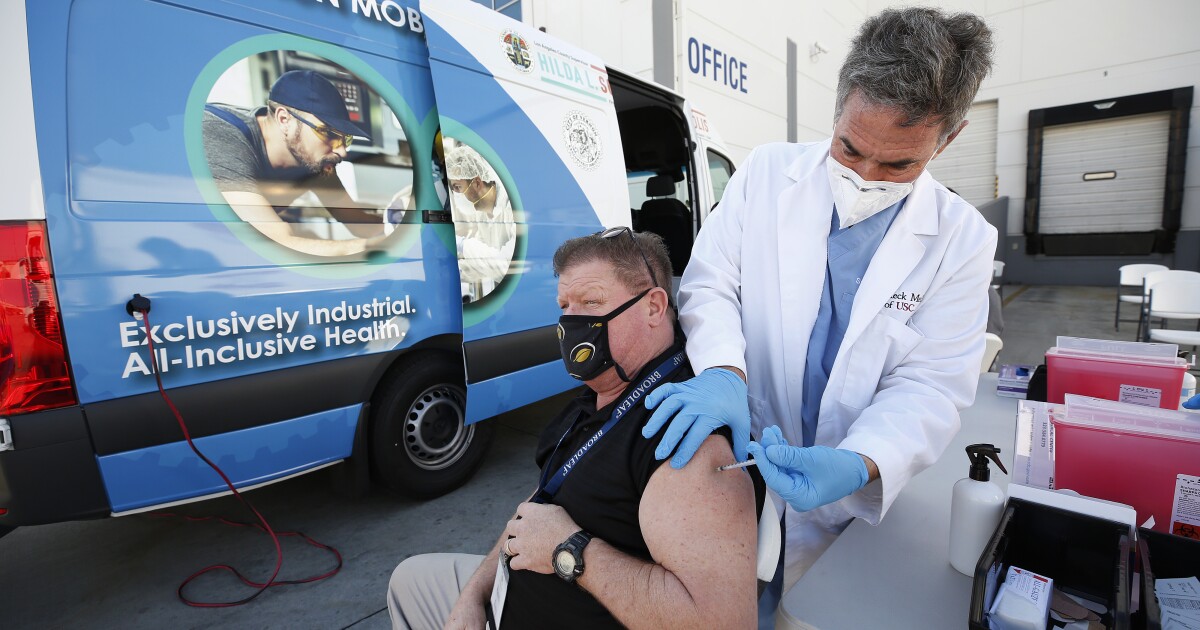 All California adults will be eligible for vaccine April 15; 50 and older starting April 1 Most children with rare and serious inflammatory illness had mild Covid

It’s OK to mix and match COVID-19 booster shoots. Which one should I get?

There’s a new national hotline for mental health. How will we pay for it?