As scientists around the world race to find a drug to cure COVID-19, in a humble little apartment in the West Adams neighborhood, Rosalía González prescribes her own remedy for the sick: a combination of faith and prayers.

Her prescription consists of praying alone in the morning, again before going to sleep, and once a week virtually with a group of 40 parishioners from Saint Agatha Church in Los Angeles that focuses on praying for COVID-19 patients, for those who have lost a loved one and for the end of the pandemic.

As a Roman Catholic, González said, her prayers are directed not only to God, but also to the Virgin Mary and certain “saints who are famous for interceding for the sick.”

“I am not crazy. I assure you that prayer heals us and others when we ask for it,” said the 49-year-old, who is the group‘s director.

González said she couldn’t discuss specific cases in which her group’s prayerful interventions have had an impact. Prayer, she said, “does not give you results from one day to the next, like magic.” But she insists that “people with anxiety or depression who come for help see improvements with continuous prayer.”

“The group prays for the whole world and for our members and for the families of our members who have been sick with coronavirus,” she added. “Many of them have healed and we talked to each other about these improvements attributed to our faith.”

Her spiritual conviction typifies that of millions of people of various faiths who take refuge in prayer in difficult times. The coronavirus pandemic sparked a 50% increase in online prayer searches last March — to cope with feelings of anxiety and hopelessness, and to entreat a higher power to end the pandemic, according to a May report from the Center for Economic Policy Research, a Washington, D.C. think tank. In the United States alone, more than half of all adults (55%) said they have prayed for an end to the spread of coronavirus, according to a poll by the Pew Research Center.

Particularly in times of massive upheaval — wars, natural disasters — many turn to prayer for solace, solidarity and a sense of direction, said David H. Rosmarin, assistant professor of psychology at Harvard Medical School and director of the Spirituality and Mental Health Program at McLean Hospital in Belmont, Mass.

“Part of this behavior is because people are looking for a supreme connection. This helps them to have a sense of togetherness with others. As they pray, they can feel that someone supreme is taking care of them, and that gives them hope. Also, they feel that their life has a purpose, to help,” said Rosmarin, who collaborates with laboratories around the nation to study the clinical relevance of spirituality for treating anxiety, mood swings, psychotic behavior, substance abuse and other disorders.

Rosmarin said that although research on the physical health benefits of prayer is limited, certain studies have shown that it may help reduce stress and anxiety.

“Just because the CDC [Centers for Disease Control and Prevention] doesn’t recommend prayer as a healthcare intervention doesn’t mean that it does not work on our emotions,” he said. “If someone feels better praying, or if someone feels better knowing that someone prays for him, that in and of itself is worthwhile.”

Dr. Andrew Newberg, director of Research at the Marcus Institute of Integrative Health at Thomas Jefferson University Hospital in Philadelphia, observed that “there are definitely physiological changes when people pray.”

Newberg has studied the effect of prayer on the human brain for more than 25 years by injecting radioactive dye, a tracer, into the brains of his volunteers. Praying or sending prayerful thoughts to someone is generally associated with increased activity in the frontal lobe, just behind the forehead.

“Just by doing that, a lot of changes start to occur,” he said.

“The frontal lobe, which is very closely connected with the limbic system, our emotional centers of the brain, you can have different intense emotional reaction to prayer,” he continued. “You can feel uplifted or calm. If you can regulate your emotional responses better, that makes you understand how this practice can help you reduce anxiety and depression.”

Also during prayer, a person blocks out other sensory information that goes into the parietal lobes at the back of the brain, which helps create a sense of connection “to people in church, world, to God, whatever your focus is,” Newberg said.

“While all of this is happening in the brain, the emotional centers regulate what is called the autonomic nervous system. This system is the primary mechanism that controls the fight-or-flight response that affects our heart rate, blood pressure and stress responses in body,” he said.

González, a babysitter by trade, said her knowledge of how the brain functions is limited. But she knows how she feels when she prays: “physically healthy” and “mentally at peace.”

In her prayer ritual she incorporates St. Roch, known as protector against plague and epidemics, St. Agueda and Santiago Apóstol, a guardian against disease, among other saints.

“We have to remember that faith moves mountains. We can’t ask and wait if we don’t believe it’s going to happen,” González said.

Problems at home led González to God. A decade ago she felt frustrated and angry because her ex-husband did not work, and she had to cover the rent, food, and household bills as well as handle all the home chores.

It was then that she began to find comfort in God and her prayer group. This, she said, helped her to jettison bad habits, love people more, be patient and not judge.

“Our group was already in force in the church long before I arrived, but in the last year we had to focus our prayers on the coronavirus issue because the whole world has been affected,” said the native of Tlaxcala, Mexico.

The stay-at-home orders forced churches to close in March 2020, and many prayer groups disappeared, she said. “But our group decided to continue, praying all together or sometimes in small groups of 10. It does not matter how you pray, where or when, the important thing is to do it.”

Antonia Gabriel Vázquez, 52, has been in the same prayer group for 15 years. The West Los Angeles resident says prayer healed her and her husband Luciano, 46, from COVID-19.

Vázquez, who has suffered from lupus for seven years, began to feel the symptoms — body aches, headaches, fever, shortness of breath — last New Year’s Day, as did her husband, a gardener. On Jan. 5, both were diagnosed as positive.

“There was a time when I woke up and felt the atmosphere very heavy, I had a hunch that I was going to die,” Vázquez said. “I could not breathe, and I asked God to breathe for me because I had no strength.

She called a friend, Maria Puebla, and asked her to pray for the couple over the phone, while Vázquez and her husband knelt at the foot of their bed. “I do not remember how long we prayed, but after a while he and I went to sleep. In the following days we recovered.”

“I truly believe prayer was effective in healing us. I believed God has a purpose for my husband and me. It was not our time,” said Vázquez, who works as a babysitter.

Salah Jaffer Alattar, a Southern California religious scholar known to his Muslim community as a sheikh, believes that prayer is effective and necessary for humankind.

“The beauty of prayer is that the Lord listens to everybody,” he said, “whatever you are and, in any language.”

“It is my belief that this pandemic can be a lesson for us to get closer to the Lord,” he continued, “closer to our loved ones and reevaluate what is important like health and family.”

Dr. Richard P. Sloan, Nathaniel Wharton Professor of Behavioral Medicine at the Irving Medical Center of Columbia University, suggested that there is a growing desire among many Americans to replace rationalism with subjectivity, scientific fact with faith and conjecture.

“There is no reliable literature to support that intercessory prayer for others has any impact. Nor can you take a person’s anecdote as evidence,” he said.

Sloan stressed that the problem with studies of prayer’s effects (or lack thereof) is that, “you cannot just take a group of people at random and assign them to pray for themselves or others to see which group does best, because religion is a personal characteristic.”

Sloan said many hospitals across the nation integrate some form of spiritual service for patients, involving chaplaincy and prayer, “because chaplains can help patients express themselves in ways that cannot be expressed with nurses.” But that doesn’t mean prayer can directly affect physical health.

“I can conceive of the possibility that, if you pray for yourself, that may help you in some psychological benefit … but there is not much evidence for that either,” he added. “If you decide to just pray instead of going to the doctor you are risking your health by not getting the decent medical care you need, all because you are in favor of a practice that has no basis in science.”

In California, many hospitals such as Providence Mission Hospital, UCI Health and St. Joseph in Orange County, as well as Dignity Health Glendale Memorial Hospital and Children’s Hospital in Los Angeles County offer spiritual services. But their chaplains respond cautiously when asked if they believe that prayer can heal someone physically.

The Rev. Cassie McCarty of Dignity Health Glendale said prayer is “a mystery.”

“Prayer is something patients may or may not want, but we find that it provides them with peace, faith and comfort,” she said. “I don’t want to give a yes or no answer” as to whether it’s effective in healing.

“Without a doubt, it is a strategy that we want to combine with all the medical care that we provide for our patients as part of comprehensive support and care.”

Rather than discussing whether prayer can heal, Father Allan Deck, a theology professor at Loyola Marymount University, shared an analogy and asked a question.

“Our bodies are like radios, if we are not in tune, we simply do not function properly,” he said. “Prayer puts us in tune: It opens the heart and mind to receive the gift of life, the love of God and the love of others.

“Prayer is recognizing that we depend on others. If we do not believe in anyone or anything, we are vulnerable to experience extreme loneliness and hopelessness in this massive world, especially in hard times. Do you prefer to believe or not?”

As for González, she said she doesn’t need scientific studies or expert approval to believe in prayer.

“The results of prayer depend on individual faith, and I have faith,” she said. “I will continue prayer for others and for me. I invite the community to be part of this miracle.”

Jets GM Joe Douglas speaks on Sam Darnold trade: 'I could not give two s—s' if I look bad 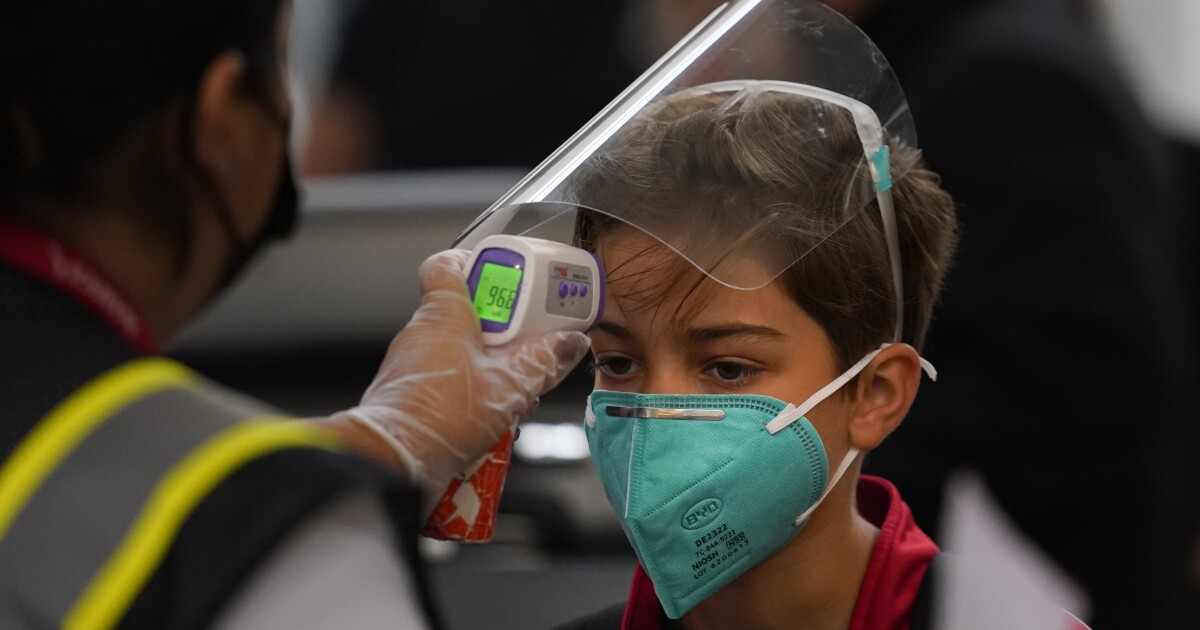 ‘Getting worse each day’: 1 in 145 L.A. County residents can infect others with COVID-19 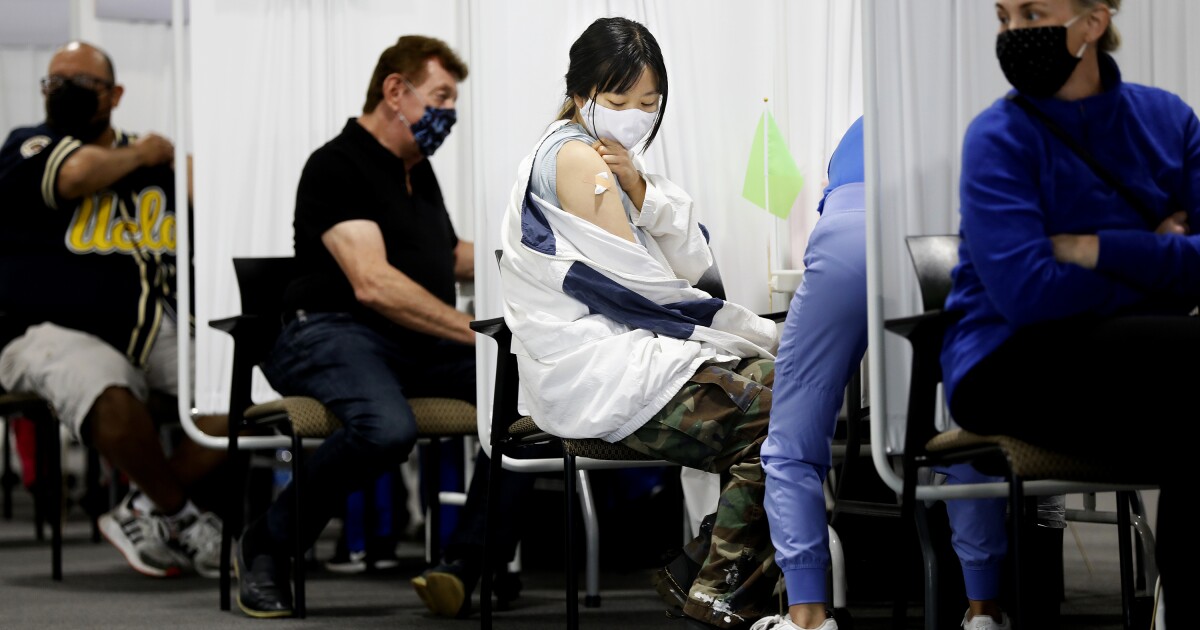 California has given 30 million COVID-19 vaccinations, but demand may be dropping 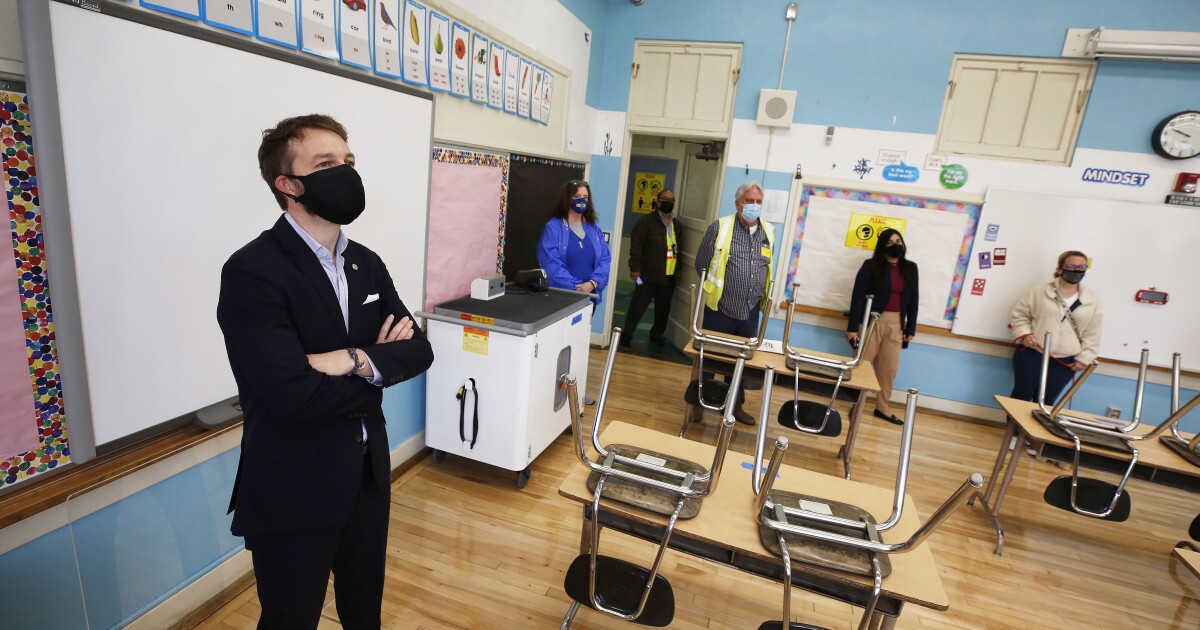 Los Angeles public schools will begin reopening next week. Here’s what you need to know