WASHINGTON — A panel of the Centers for Disease Control and Prevention this week announced its guidelines for the first phase of the most ambitious national vaccination campaign in modern history.

Yet beyond the guidelines advising states about how to deploy their vaccines — and a large Defense Department operation to deliver them — the Trump administration hasn’t prepared for a major federal role, a lack of planning that is causing significant anxiety among state and local health officials.

The significant checklist of unmet federal responsibilities underscores the challenges ahead for President-elect Joe Biden, who inherits most of the burden for executing a successful nationwide campaign to vaccinate all Americans, potentially without the billions of dollars in additional funding that will be needed.

The warning signs have been evident even though authorities have had nine months to prepare for mass distribution of different vaccines. For example, the federal government is still trying to fine-tune a system to track critical medical supplies, like syringes, and to facilitate regular communication between administrators and providers.

And it is falling to cash-strapped states to establish thousands of mass vaccination clinics, procure staffing and lead major public relations campaigns to inform Americans where to get the vaccine and why they need it and to make sure they get second doses despite potential side effects.

“The new team is going to have an amazing challenge of trying to get the public’s confidence and overcome all the ways they are being set up to fail,” said a former senior official of the Department of Health and Human Services.

For instance, “if you’re going to use a brand new set of untested [logistics] systems, then you need trial runs to get the bugs out,” the former official said. “To leave this to the states and say ‘sink or swim’ is nuts.”

Biden spokesman TJ Ducklo said in a statement that the president-elect “is fully committed to doing everything possible in the weeks and days before January 20 to ensure the Biden Administration is prepared to safely, effectively, and equitably distribute a COVID vaccine across the country.”

“Part of that mission,” Ducklo said, “means working with the government officials tasked with that job so the new Administration can waste no time and begin delivering results for the American people as quickly as possible. That is happening now, and will continue in the weeks ahead.”

Dr. Mandy Cohen, secretary of the North Carolina Department of Health and Human Services, underscored the need for a major information technology interface given the number of systems at the state level. “This is going to be a historic amount of work to get the population vaccinated,” and “the federal government has a huge role to play,” she said. Right now, “there is a lot on the states.”

Another state health official who speaks regularly with Operation Warp Speed, the government’s project to rapidly distribute a vaccine, said it is obvious that the first phase — vaccinating health care workers and nursing home residents — has been engineered to “run smoothly.”

It “will be deceptive,” the official said, warning that the lack of federal coordination with local health departments, combined with no funding and massive IT hurdles, could cause problems in vaccinating the broader population beginning as early as February. “It’s obvious how this will go over,” the official said, noting the timing with Biden taking over.

Operation Warp Speed is using the Tiberius platform, loaded with data from the census, state and federal health agencies and the CDC, to integrate data related to manufacturing, clinical trials, supply chain and other logistics.

But the platform doesn’t integrate a diverse patchwork of state and local IT systems, along with multiple other federal systems that should all be communicating.

Lori Tremmel Freeman, CEO of the National Association of County and City Health Officials, said it’s probably “too late” to create the kind of seamless system needed to meet the moment. “I do not know why this couldn’t have started nine months ago. It could hold us back from being more successful, and it could take more time” to get people vaccinated. “We don’t have time,” she said.

A person involved in the planning said “our biggest fear is we’re going to have close to a silver bullet and it might not work” if too few people get vaccinated over too short a time and states don’t get the billions in extra congressional funding necessary to execute.

The U.S. is close to authorizing its first Covid-19 vaccine — a Food and Drug Administration advisory committee meeting is scheduled for Dec. 10 — and two vaccine makers are seeking emergency use authorization.

On Monday, Army Lt. Gen. Paul A. Ostrowski, Operation Warp Speed’s director for supply, production and distribution, said that by the end of June, 100 percent of Americans who want a vaccine will have it, setting expectations for programs that don’t have the money or the infrastructure to succeed.

There is no strong federal plan for what happens after the first critical round of Americans are vaccinated in December and January. Speaking about the states, Operation Warp Speed’s chief operating officer, Army Gen. Gustave Perna, said Wednesday, “Our responsibility is to enable their plan, to empower their plan.”

Topher Spiro, vice president for health policy and a senior fellow for economic policy at the liberal-leaning Center for American Progress, said, “The Trump administration is really just focused on distribution, which is really just shipment to the states.”

Once medical providers, first responders and certain vulnerable populations are vaccinated, an estimated 209 million people will need access to a vaccine within a month for it to help achieve herd immunity. Current U.S. infrastructure is incapable of meeting that demand, Spiro said.

Peak volume for annual flu vaccinations in the U.S. is about 70 million in September. Spiro estimated that it will require 3,000 more administration sites. “You want them to be able to drive up or walk up and be vaccinated in less than five minutes,” he said.

Dr. Dan Hanfling, a biosecurity and disaster response expert, said: “You can’t say you’re going to leave it to the states. If one state does it one way and the other state does it another way, people will be trying to cross state lines to game the system.” Hanfling was among experts on an email chain this year who sought to warn the Trump administration about the coming pandemic.

“It will just create a cacophony of a response,” he said.

Google rolls out 2Gbps fiber service in Huntsville and Nashville

In milestone, over 80% of eligible Californians now partially vaccinated against COVID-19 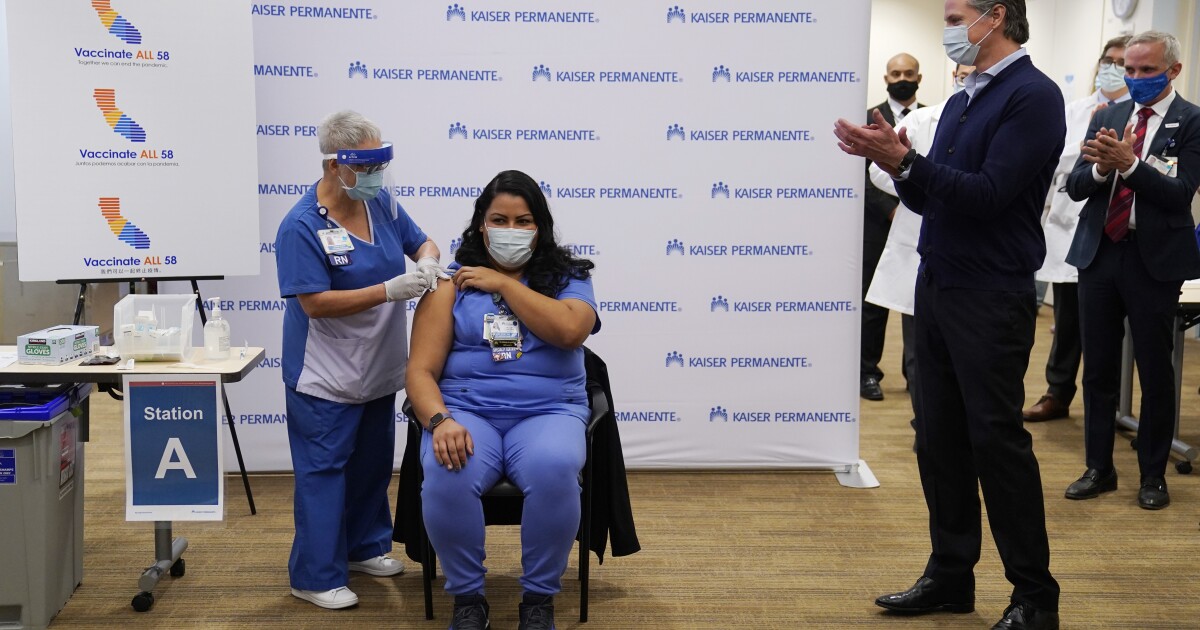 COVID-19 vaccine side effects: What you need to know

Pfizer says its Covid vaccine is safe and effective for children Letters to the Editor: Computer screen learning has been disastrous for kids. Reopen schools now