Before the Covid-19 pandemic, Rochelle Bowyer, a fourth-year student with dyslexia at the University of Washington, did everything she could to make her education accessible. She enrolled in courses a month early so that course videos could be closed-captioned, proactively communicated with professors and administrators to schedule her tests outside of regular class time, and sat in the front of every class to record lectures using the voice-memo app on her phone.

She figured her university was doing everything in its power to accommodate her in turn. But after Covid-19 moved courses online, she concluded she’d been wrong.

On Zoom, she obtained high-quality recordings of class lectures, complete with slides and auto-generated closed-captioning with the click of a button. These were far superior to the recordings she could make on her phone. Before the pandemic, it was unimaginable that professors would record their lectures synced with slides in her classes.

“There’s this idea that if you record the lecture, students will stop showing up,” Bowyer said. In an op-ed in The Daily, the University of Washington’s student newspaper, Bowyer speculated about the learning experience she might have had pre-pandemic if her college had invested more in accessibility, saying she could have spent class time “learning rather than panicking.” Since this technology had existed before, she wondered, why did it take a pandemic for the university to start investing in accessibility?

The pandemic has accelerated the conversation about disability accommodations on college campuses, as requests long labeled impossible, such as remote learning and recorded lectures, were universally adopted overnight. Now, as many colleges roll out plans for a return to “normal” this fall, students, professors, and disability activists are questioning the way people conceive of normalcy — and whether or not it’s a state that’s even desirable to return to.

“‘Normal’ was normal for some people and was terrible for a lot of people,” said Jasmine E. Harris, a professor and expert on disability and antidiscrimination law at the University of California at Davis School of Law. “The pandemic is this breaking down of the wall between students and professors in higher education. Suddenly, our internet all cuts out at various moments, and we all have people walking in the background or are trying to make sure that our pets are quiet.”

These humanizing and direct views into their personal lives have forced people to fundamentally rethink the ways they work and learn, and needs that many disabled people have lived with for years are suddenly mainstream.

Now, Harris said, students across the board “are more attuned to how they learn and what doesn’t work for them.” Professors are more likely to be flexible because people understand that no one has taught this way before, and everyone is trying to adjust.

For Bill Dengler, a junior at Swarthmore College who is blind, virtual learning means he doesn’t have to worry about memorizing the physical location of his classes or figure out how to get into the buildings where they take place. For the first time, he can easily obtain information sighted people take for granted: How many people are in his classes? Who are they? Who is speaking at any given time? Dengler does this by using the screen-reading software on his computer to check the participants list on Zoom during class and deducing information based on simple arithmetic — subtracting the professor from the total number of participants on the call — or observing who’s unmuted.

“When I would be in an in-person classroom, I would take my computer with me and run everything off of that. But now everyone’s running off of their computer,” he said. “It’s kind of leveled the playing field.”

This new accessibility isn’t limited to classes. Knowing who his classmates are has allowed Dengler to connect socially with them. For students whose disabilities affect their mobility or energy level, the online mode of events allows them to attend talks, social gatherings, and cultural clubs that they might typically have missed.

While these changes are promising, some people with disabilities are also frustrated. Change didn’t come because of a fundamental shift in the way people think about disability; it came because suddenly, the needs of people who don’t identify as disabled converged with the needs of those who do.

According to Josie Steuer Ingall, a rising junior and secretary of events and treasurer for Disability Empowerment For Yale, or DEFY, disability is still heavily stigmatized and “invisibilized.”

“Many people have identified the hypocrisy in the refusal to grant people with disabilities the accommodations that, once everybody needed them, were made readily available instantly,” says Steuer Ingall, who has ADHD and Ehlers-Danlos syndrome with a cardiac comorbidity. “It’s really stark the extent to which Yale is willing to accommodate the majority and not a minority — despite the fact that we are protected under law and that we are human beings and members of this community as much as anybody else.”

Karen Peart, director of media relations at Yale, wrote in an email that decisions about accommodation are made on a case-by-case basis. “We will be actively reviewing what opportunities will best support individual students without fundamentally altering Yale’s in-person classroom experience,” she wrote.

The technology to accommodate students exists, but there can be a stark difference between what is possible and the reality for students. For example, auto-generated closed-captioning on Zoom has been available for several years but it was not made available at Yale until last November. Even now, the host has to configure meeting settings to enable the feature, and not all professors do.

At the University of Washington, the current lecture capture system, Panopto, was implemented in 2014 and similar technology has been in use for even longer, according to Victor Balta, senior director of media relations. It was because many instructors there were already using it, with university-provided training, that “UW was able to transition smoothly and on very short notice when it became the first university in the nation to switch to remote instruction.”

But in 2018, The Daily reported that “only 15 percent of the UW’s 300 general-use classrooms are equipped with lecture capture technologies,” and in the classrooms equipped with the technology, “only 20 percent of the classes that take place there actually get recorded.” Bowyer, the student who wrote the op-ed, had never taken a class that used Panopto before the pandemic.

Virtual classes have provided flexibility for students and reduced the need for accommodations related to the physical environment, but they are not a universal solution to problems with accessibility. In fact, for some students, such as those with ADHD, online courses present unique challenges and have exacerbated barriers. For the 2020-21 academic year, students have taken time off, been forced to choose from limited class options because of their institutions’ reopening plans, or dropped out all together.

According to Sarah Scott Chang, student-accessibility-services director at Yale, the pandemic has also created the need for novel accommodations — particularly for those with chronic medical conditions and mental-health disabilities. “Many of these are situations that would not impact a student’s life at the level of a disability but for the pandemic,” she said.

As colleges plan for in-person instruction, students with disabilities are finding themselves fighting for accommodations once again.

Antonio Milane, a senior at Paloma Valley High School, in California, was admitted to Stanford University, his dream school, in December. Milane, who has cerebral palsy, requested a scribe for his classwork — an accommodation his public high school provides because he can’t write. But Stanford told him it couldn’t provide one, saying a scribe was a “personal preference.” Milane said paying for the necessary accommodations out of pocket would have made Stanford prohibitively expensive.

“I was going to have to pay $50,000 on top of tuition,” Milane said. “I would go broke trying to go to college or not go to college.” He said he got similar responses from the other highly selective colleges on his list. “They all said, ‘We’re not going to be able to give that to you.’”

Colleges were generally unwilling to provide details about accommodation before he committed. Some told Milane that a scribe was too expensive. Others said that they’d follow up with more details, but he never heard from them.

After Milane posted a video explaining his situation, his story went viral and the accompanying petition garnered more than 74,000 signatures. Stanford committed to providing Milane with a scribe, and he, in turn, has committed to the university.

But Milane is not confident that the situation is resolved: When he asked administrators to put concrete details about his accommodations in writing, he said, the responses were “broad” and didn’t describe what he needed.

Milane said he has been promised scribal services for classes and homework, but the college experience includes much more than academic studies.

“The full scope of these scribe services depends on the nature of a student’s course choices,” E.J. Miranda, a spokesperson for Stanford, wrote in an email to The Chronicle. “We are careful to conduct an individualized assessment upon matriculation to ensure each student’s specific needs are met.”

Milane has always had to advocate for himself. His struggle for a scribe at Stanford is the most recent in a series of battles for accommodations that started in elementary school. But accessibility is a baseline requirement established by the law, not the ultimate goal, advocates say.

“It’s really important to me that people conceptualize disability rights as a civil-rights movement,” said DEFY’s Steuer Ingall. “The ultimate goal is not accessibility. It’s dignity. It’s self-determination. It’s autonomy. Accessibility is an incredibly small part of that.”

When it comes to reopening plans and navigating the pandemic at an institutional level, Steuer Ingall said, “I am not feeling convinced that the disability community has a true seat at the table.”

“That blurring,” she said, “is really the point of innovation.”

Many accommodations benefit everyone, not just students with disabilities. This year, for example, recorded lectures have benefited students who would have missed class because of work or illness, or because they are based internationally, have unreliable Wi-Fi, or just want to review before an exam. Sidewalk ramps built for wheelchair accessibility are useful to students moving into dorms, parents pushing strollers, and scooter riders.

Disability is an intersectional and diverse identity. And people can become disabled at any time, even if they don’t identify as such; the pandemic has reminded people that all ability is, after all, temporary.

“We live in a time of mass disablement,” said Aimi Hamraie, an associate professor of medicine, health, and society at Vanderbilt University. “That is Covid, but also the trauma of Covid or the exhaustion that many people are feeling.”

Some students with disabilities have yet to receive formal diagnoses, and may never get them. These students, Hamraie said, might not be accustomed to advocating for themselves, know what to ask for, or even know that they can ask.

Looking forward to fall, the discourse about returning “back to normal” might be misguided.

“I don’t think that’s an option,” Harris said. “If we go back to those structures that we’ve had in place forever, then we’ve missed an opportunity. And we’re going to continue to discriminate against the groups that were discriminated against before the pandemic. Except because of the pandemic, we’re going to have more people who are going to be excluded.”

Serena Puang is a freelance journalist and a rising junior at Yale University.

Demi Lovato's New TV Series Is Out Of This World 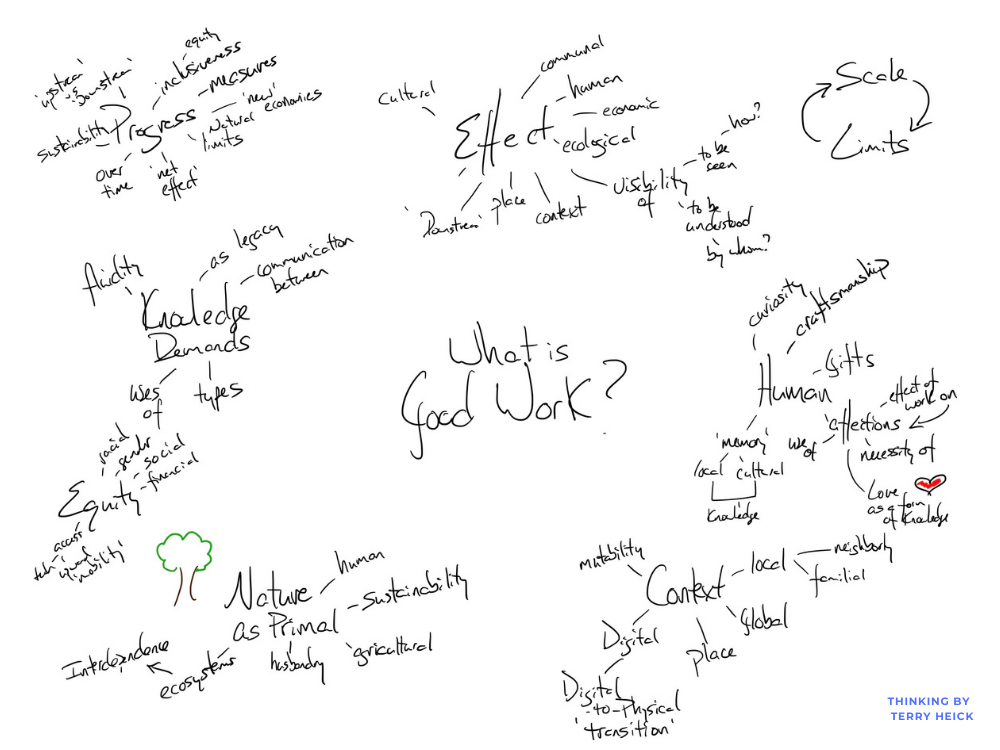 The Definition Of Good Work |