(This is the first in a series on college applicants and the circumstances that shaped their choices this spring.)

aylor Richardson wanted to go to Spelman College and nowhere else. The campus felt like home, where she was meant to be. For years she wondered if she had what it took to get in.

Then last December, Richardson, a high-school senior in Jacksonville, Fla., saw blue balloons floating on her laptop screen. “Congratulations,” the message said. She jumped around her living room, picturing herself at the historically Black college for women, in Atlanta.

Richardson, a determined student with a 3.7 grade-point-average, was known to radiate optimism. She refused to worry after seeing the five-digit gap in her financial-aid letter — a number that could unravel her dream. Everything, she believed, would somehow work out in the end.

But her mother, Latonja Richardson wasn’t so sure. She was a single parent with a master’s degree in health administration but no savings. After a head injury kept her from working for a long stretch, she got a full-time job last fall with her local government, earning $49,000 a year.

That financial-aid award from Spelman left her with a $43,000 gap. That was just for one year. But she already knew that she wouldn’t qualify for a Parent PLUS Loan. And she had burned through her 401(k).

Even as she celebrated her daughter’s acceptance, she felt anxious. Guilty, too, for not having made a better financial plan. She asked herself one day, “How the f— am I gonna pay for this?”

The Richardsons, whose had an Expected Family Contribution of $0, were on the wrong side of two major divides. One involves household wealth: The net worth of the typical white family in the United States is about 10 times that of the typical Black family. The fewer resources a student has, the shorter their list of realistic college options, barring a scholarship-miracle.

Then there’s the wealth gap among institutions. Spelman and other historically Black colleges remain in a bind: They are long-underresourced campuses serving many students with great financial need. The endowments and aid budgets at HBCUs pale in comparison with those of many predominantly white colleges, which limits how much money they can offer their admitted applicants.

Let’s look at Wellesley College, a small, wealthy, and mostly white women’s institution in Massachusetts, which enrolls about the same number of students as Spelman. In 2019-20, the average net price for families earning $30,001-$48,000 at Wellesley was about $8,000, according to federal data. At Spelman, it was about $43,000.

Taylor Richardson understood such divides, which shaped the choices available to her and so many other students. But just as she refused to worry, she also refused to sit still. The fortune she needed to enroll at Spelman wasn’t going to fall from the sky. She would have to yank it down herself.

From December through March, she applied for scholarships, nearly 50 in all. She wrote essay after essay, submitted recommendation after recommendation. And she waited.

any teenagers who applied to college in recent months had a first-choice campus glimmering in their minds. Still, for some students, there was more at stake than for others.

Richardson wanted something rare: a campus where she could surround herself with young women who looked like her. Who could relate to her experiences. Who would become her supportive sisters and lift her up. And she longed to do the same for them in return.

She had attended predominantly white schools her whole life. She had dealt with bullies and been called the N-word. She liked some aspects of her high school just fine but many times had felt like an outsider there. “It’s almost impossible to discover who you are,” Richardson recently told The Chronicle, “while simultaneously trying to prove that your existence as a Black woman holds value in a place that just didn’t understand, or refused to.”

Richardson planned to major in biology, attend medical school, and become an Ob-Gyn. An astronaut, too.

She had imagined herself soaring into the sky ever since reading Find Where the Wind Goes at age 9. It was the autobiography of Mae C. Jemison, a doctor, engineer, and former astronaut who was the first Black woman to travel into space. The book gave Richardson a role model and deepened her interest in stars and constellations. Her mother would watch her tracing the shape of the Big Dipper in the air with her finger.

Soon after reading Find Where the Wind Goes, Richardson went to Space Camp, in Huntsville, Ala. The experience, especially the simulated rocket flight, exhilarated her. She carried home a package of stick-on stars, which she arranged on her bedroom ceiling. At night, they glowed. Each time she and her mother moved, she would peel them off one by one to take to her new home.

Though Richardson loved Space Camp, she had seen no Black girls there, which she found disheartening but also motivating. So she became an activist. She wanted to inspire young Black women interested in science, technology, engineering, and math, but who might not see themselves entering those fields — or have anyone encouraging them to do so.

As a student space ambassador, aka Astronaut Starbright, she visited schools wearing her blue NASA jumpsuit. Later, she stumped for STEM inclusivity in speeches she gave throughout the country and abroad.

Crowdfunding came naturally to Richardson, who, along with her mother, had financed her trip to Space Camp via GoFundMe. In her early teens, she raised about $20,000 to send 100 girls in Jacksonville to see Hidden Figures, a 2016 film about three Black female mathematicians who played a crucial role in building the U.S. space program. She used the remaining funds to create a scholarship enabling a young woman from Florida to attend Space Camp.

And in 2018, Richardson raised more than $50,000 — which Oprah Winfrey later matched — to send 1,000 young women to see the film A Wrinkle in Time and get them a copy of the book, by Madeleine L’Engle. “It’s a fantasy film that is not about some white boys fighting evil,” Richardson wrote online, “but about a black girl overcoming it.”

This past February, Richardson created another GoFundMe campaign: “Help StarBright Get to College.” She explained that even with a federal Pell Grant and all the student loans that she could take out, she would end up well short of the total amount she would need — an estimated $50,000 — for all of her first-year expenses, including books and transportation.

hough Richardson had her heart set on Spelman from Day 1, she applied to a total 30 colleges and received nearly two-dozen acceptances. But acceptances that come with insufficient aid don’t represent viable choices.

Several colleges that Richardson got into offered her some financial aid but not enough to make them affordable options. She was accepted at an Ivy League college that essentially gives a full ride to students from low-income families. But she didn’t end up getting a generous award.

That’s because the institution denied her mother’s request to waive a requirement: that both parents must submit detailed financial information before an applicant can be considered for aid. She just didn’t have the kind of relationship with Taylor’s father — who lives in Atlanta with his wife and their two children — in which discussing the intricacies of paying for college would be comfortable. “We never talk money,” she said.

By the end of March, none of the scholarships Richardson applied for had come through. Her mother kept thinking, Oh my God, she’s not going to be able to go to Spelman.

It hurt. After all, she had done a lot for her daughter. When Taylor struggled with reading and attention-deficit/hyperactivity disorder in the second grade, she read to her often, taking her to the library to check out books and audiobooks. She had provided her with several telescopes for peering into space. And she had surrounded her with models of what she called “Black excellence,” be they orthodontists, pediatricians, or mentors.

But this mother couldn’t fix one problem: Taylor Richardson — an accomplished student who had raised $350,000 for various causes and logged thousands of hours in community service, whose activism had inspired a documentary and mural in her honor, and whose commitment had moved the city of Jacksonville to pass an official resolution honoring her “outstanding and unprecedented work as a teenage philanthropist and advocate for STEM education, literacy, and social justice” — might not end up with the funding to choose among colleges the way other applicants could.

As the spring unfolded, Latonja Richardson encouraged her daughter to think about colleges besides Spelman, including Howard University, an HBCU in Washington, D.C. Howard had offered her a good deal of aid, which would’ve covered about half of her cost of attendance.

Richardson still believed she would find a way to get to Spelman. Then April arrived — and so did an email.

Richardson’s mother cried and said, “Thank you, Jesus!” She tried to FaceTime her daughter, who was in class. That night they celebrated over dinner.

A prospective astronaut-Ob-Gyn, who speaks matter of factly about someday delivering babies on Mars, had earned every cent of a full ride. But luck, her mother understood, played a role in determining who among many accomplished and deserving students ended up with a prize.

Weeks later, Richardson went to Atlanta for Spelbound, a two-day program for admitted students at Spelman. Walking around, Richardson felt like she could finally … breathe. She experienced the intimate atmosphere of Sisters Chapel and saw students perform a step show. She ate vanilla ice cream with Oreos at a social gathering with Morehouse students. She met her future roommate and rejoiced in seeing so many young Black women, as she put it, “loving each other.”

Richardson was going to Spelman. All because she had snagged something all too rare: a giant scholarship, like a treasure pulled down from the sky, allowing her to attend the college she had chosen but couldn’t otherwise afford. She planned to use the money she had raised on GoFundMe to cover expenses — the cost of renting an apartment in Atlanta down the line, perhaps, plus med school — and to help students in need.

Late one Wednesday night in May, Richardson was studying anatomy in her room, surrounded by a Black Lives Matter flag and posters of Beyoncé and Nicki Minaj. She stopped to watch Despicable Me and kept wondering if she would get her prom dress altered in time for the following weekend.

Richardson thought about how grateful she was to be on her way to her first-choice college. And she thought about all the students who couldn’t say the same. She typed a message into her phone: “No one should not be able to go to school bc of lack of money. Period.”

She slept under a ceiling of stick-on stars. 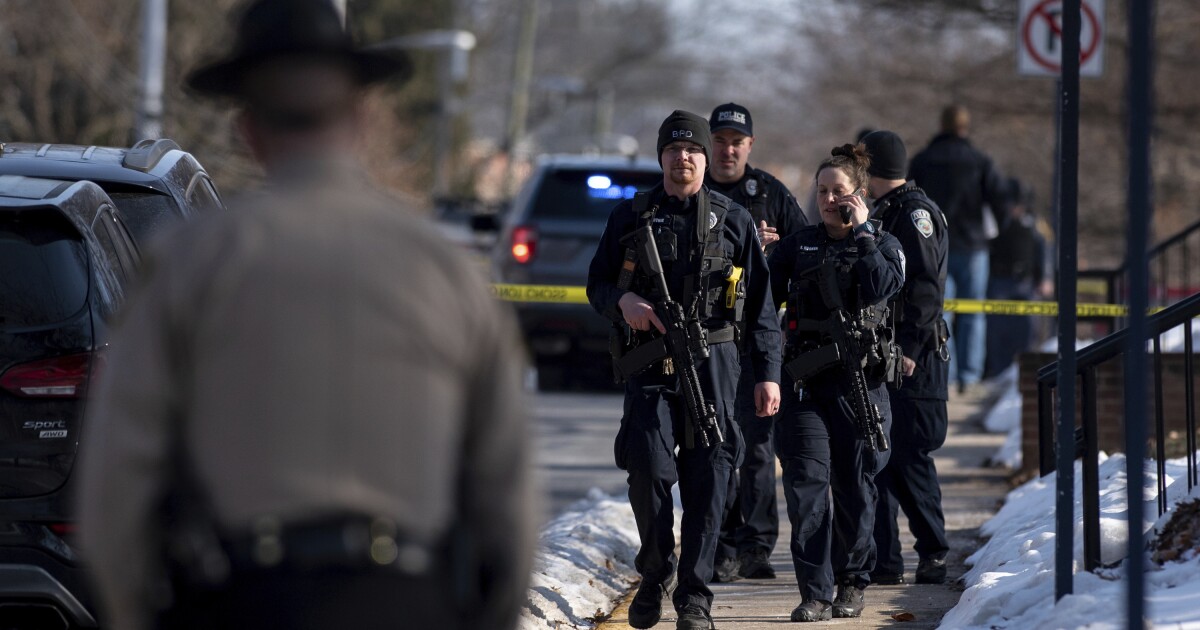 2 Officers Are Killed in a Shooting at Bridgewater College